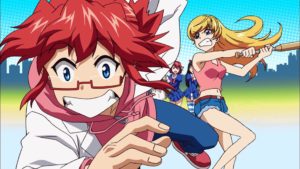 Now, I like a goofy show as much as the next person, but it bothers me when they break in into a ‘half-and-half’, so the first grouping of episodes are an exhilarating ride and when the ‘serious’ ones make their appearance, it gets somber and introspective, losing some of the charm that got you here in the first place. Such is the case with “Ultimate Otaku Teacher” (“Denpa Kyōshi” or “Electromagnetic-wave Teacher”, subtitled “He Is an Ultimate Teacher”). We have Jun’ichirō Kagami, 24, who is a genuine genius. He published a paper at 17, talking about a teleportation device. Despite that majestic early splash, he would rather spend his time playing video games and being a real NEET (but not necessarily a hihikimori). His sister, Suzune, feels that his talents are being wasted on his anime blog (What?!!? Wasting time with an anime blog? Is she nuts?) and he needs to get a job. No, let me rephrase that. GET A JOB OR I’LL BEAT YOUR BRAIN IN! (She is batting .545 with an on-base plus average nearing 1.000). END_OF_DOCUMENT_TOKEN_TO_BE_REPLACED 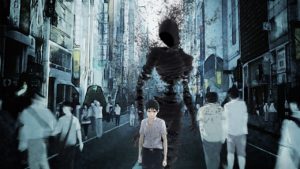 Immortality is a theme that has been addressed in numerous shows, but not in this particular manner, where it is to be feared. “Ajin: Demi-Human” looks at this idea in a disturbing approach. What is an ‘ajin’? This is a person who is an immortal and almost cannot be killed (they did research and experimentation on all of this). The problem is that you do not know you are an ajin until something happens to you that reveal it. Kei Nagai is just a kid (that angry one in the center; he really liked that shirt!), going to school or whatnot, when he is run over by a truck and killed, but on the way to the hospital, he revives and discovers that he is an ajin. Thus is the end of his ‘normal’ life. END_OF_DOCUMENT_TOKEN_TO_BE_REPLACED 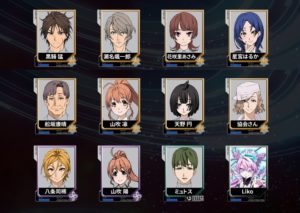