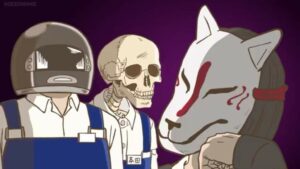 This has got to be the funniest series I have encountered, owing to a ton of decisions that were made that merely add to the insufferable inanity that is the world of retail. We are at a bookstore, but we are hovering around the manga/light novel/comic books portion of it. Welcome to the world of “Skull-Faced Bookseller Honda-san” (Gaikotsu Shotenin Honda-san, “Skeleton Bookstore Employee Honda”). And you are welcome to it!

Skull-Faced Honda (I bet you a 100-yen coin you can find him up there) is in charge of the foreign comics and Art Books part of the store, but he has to know about all aspects of all books in the store and, at the very least, where they are. If you have ever worked retail (I spend a couple of years at Tower Records), you commiserate with what this schlub has to go through.

I really enjoyed the decision that you NEVER see the face of any of the staff. Aside from Okitsune (Fox Mask) and Fullface (Motorcycle Helmet), we also have Kamibukuro (Paper Bag Over Head), Hōtai (Bandages Covering the Face), Lantern (Pumpkin Head), Koomote (Omote Mask), Rabbit Head, Gas Mask and Pest Mask. We spend the series seeing them trying to survive another day at the book store with the endless land mines strewn before them.

And they are beset by people who don’t really know what they are looking for or do not understand what BL is or DO understand what BL is or are anxiously awaiting the arrival of the latest offering, which is late, late, late. Then, you have to deal with the book agents who come in and try to sell these books and they never seem to have enough of the titles everyone wants and far too much of the ones that do not move at all. And they are always trying to cut a deal that benefits them and hurts you, as THEY have bosses as well, who are as big of buttheads as all of the other big buttheads out there.

The episode when management wants the employees to get along better and they waste a day in a class to promote camaraderie rings far too true for anyone who has had to endure such pointlessness, especially since management is never going to follow up on it. It’s a wonder any of them are sane or even in one piece.

As much as I savored this show, you HAVE to binge it. You can enjoy what goes down, but they are short episodes in and of themselves. The unrelenting nature of the horror of people in a book store needs that inundation of plowing through it and the overwhelming sense that it will still fall short, despite your best efforts, just adds to the hopelessness of the situation. Can a skeleton sweat? We are talking flop sweat!

Most of the time, the staff are cowering in back, and I mean cowering. They are not much better than a quivering mass of Jell-O® (with or without the fruit bits) as they hide behind a massive stack of boxes. Nope, get your retail keester out there and sell dem books!

The very nature of this means that the abbreviated length works best for it, although I feel they could have the episodes a bit longer. I think the tales would hold up just as well, but that’s me. A similar show is “Denkigai no Hon’ya-san”, which covers the same kind of territory, but not with these Cast-Off characters. Both do it well, but “Honda” does it a tad better, as people, both in front of and behind the counter, get unhinged with little to no provocation.

And remember, it’s first run until you’ve seen it. My back!

2 responses to “Short Pull Series XXXI: Are You Outta Your “Skull”?”