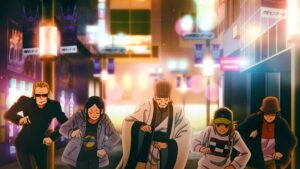 I had resisted this show for some time. I have a hard time with music genres and sports genres, as they are quite similar in their approach: someone wants to make it, but the odds are long and the opportunities are short. The road before them is littered with the bleaching bones of those who went before and failed. (“Fortune favors the brave.” No, it doesn’t, Matt!) But, somehow, through diligence, talent, commitment and a bit of pixie dust, they can achieve their dream. Am I right? Right? However, the offering before us, “Ya Boy Kongming!” (“Paripi Kōmei” or “Kongming of the Party People”) tells this story in a most charming and interesting way. END_OF_DOCUMENT_TOKEN_TO_BE_REPLACED 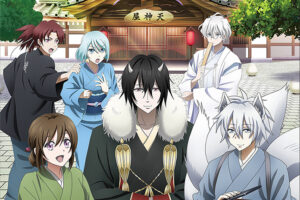 There are a group of fictional characters that have been played to death, either in movie or on stage. These include such ‘people’ as James Bond, Frankenstein’s monster, Hamlet and Sherlock Holmes. This also includes anyone billed as such, like “Basil of Baker Street”, which was a cartoon approach to Sherlock, and, with what you have with this show, “Kyōto Teramachi Sanjō no Holmes” (or, “Kyōto Teramachi Sanjō no Hōmuzu”, or “Holmes of Kyoto”). END_OF_DOCUMENT_TOKEN_TO_BE_REPLACED 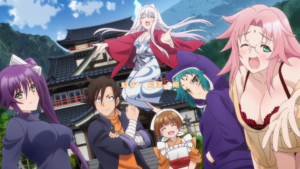 Oh, no! It’s a ghost! It’s a haunting! It’s a hot springs! We must protect the world, or at least parts of Japan, from those bad, evil, nasty, mean, ugly, cruel, vicious and rotten ghosts that will bedevil the lives of common citizen who merely want to take advantage of a lovely locale to soak away their stress! Well, things are never as they seem and such is the case with “Yuuna and the Haunted Hot Springs.” (“Yuragi-sō no Yūna-san”) END_OF_DOCUMENT_TOKEN_TO_BE_REPLACED

There is always a problem when you try to put together a show about the human body. For the most part, the body is seen as some kind of community or village or great megalopolis (think like “Osmosis Jones”) and how everyone gets along together, but the analogies don’t always work well, especially when to have to show how things function. But we make a real attempt with “Cells at Work.” (“Hataraku Saibō”). END_OF_DOCUMENT_TOKEN_TO_BE_REPLACED 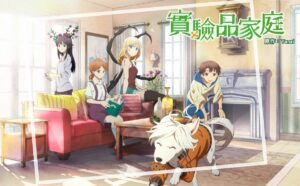 We use the term ‘Frankenstein’ to indicate a soulless monster, cobbled together from the parts of other corpses. It’s even used in reality TV, to indicate that things have been cut and pasted together to give a different impression than what happened originally. But for this show, “Frankenstein Family”, (also known as “Creatures Family Days”, “Shiyan Pin Jiating, Jikken-hin Kazoku”), it’s more to indicate they are a caliber of monster or mutant, but I guess “Mutant Family” might have a bigger connotation problem than merely being called ‘Frankenstein’. END_OF_DOCUMENT_TOKEN_TO_BE_REPLACED 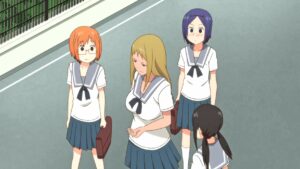 So, it is common knowledge that the Japanese will make an anime series on practically ANYTHING. I mean, there’s one that delves into the fascinating world of….being a public servant! And I saw another one about the struggles to create….a new dictionary!!!! (Be still my beating heart. It is hot in here or what?) So when I ran into this one, “Chio’s School Road” (“Chio-chan no Tsūgakuro”, or “Chio’s Commute to School”), I was ready for the caliber of boredom usually reserved for things like being trapped at the Cleveland Airport for a week. Boy, was I wrong. I mean, about the show, not the Cleveland Airport. END_OF_DOCUMENT_TOKEN_TO_BE_REPLACED 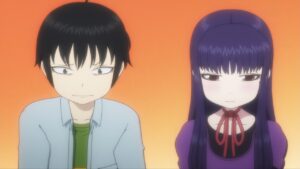 This is a real mixed-bag of a show for me. I like the general concept of it but detest the animation decisions, as it serves no purpose to make it 3D-ish, unless they were trying to tie things in with the video games they were playing. Anyway, this is the world of “Hi-Score Girl” , (‘Hai Sukoa Gāru’). END_OF_DOCUMENT_TOKEN_TO_BE_REPLACED 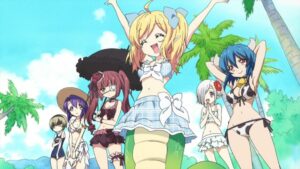 I guess if you are going to be a demon, it really helps to be a cute one. Or have big boobs. I guess that’s nice as well. At least that is one of the theories on display in this rather charming and obscenely violent series “Dropkick on My Devil!” (, “Jashin-chan Doroppukikku”). END_OF_DOCUMENT_TOKEN_TO_BE_REPLACED 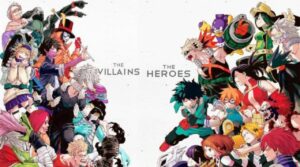 OK, so we are genuinely building to a series of climaxes, as each season is upping the stakes in “My Hero Academia”, to the point that it is a genuine wonder that none of them have dropped out. I mean, I suppose it’s nice to have a quirk, but some people have a quirk that’s not much better than being able to raise or lower the temperature of a room by 17 degrees. Still, it appears the villains are ‘shoving all the chips in’ to see what goes down. END_OF_DOCUMENT_TOKEN_TO_BE_REPLACED