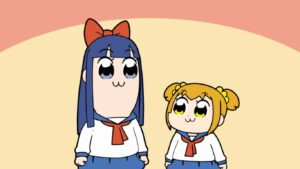 This is one seriously deranged offering. This is a very binary show: either you like it a lot or you hate it a lot. You also need to understand how it works BEFORE you go in (Wait! How can I understand what I am seeing before I see it? That’s what I’m here for!) Greeting from “Pop Team Epic” (“Poputepipikku”). END_OF_DOCUMENT_TOKEN_TO_BE_REPLACED

Horror is a genre that is down the list for me of what I wish to see in anime. I want something psychological that doesn’t involve severed limbs and blunt instruments and buckets of gore stored around the house, as it’s the maid’s day off and there is just so much to clean up. However, when I was presented with an anthology of tales derived from the disturbed pen of manga horror artist Junji Ito, since it was going to me more like “Night Gallery” or “Tales from the Crypt”, I decided to take in the “Junji Ito Collection” (“Itō Junji Korekushon”). END_OF_DOCUMENT_TOKEN_TO_BE_REPLACED

I often talk about what I don’t enjoy in anime. This is done more than to allow me to rant and rave about ‘slights’ foisted against me and more to let you know that even with this issues, I will not dismiss most anime out of hand (except “Initial D”; it would take divine intervention to plunk me down in front of that.) So when horror raises its head, I am wary. END_OF_DOCUMENT_TOKEN_TO_BE_REPLACED

Well, it came around faster than I imagined, but I realized why. So, we have had the second season of “Gin no Guardian” (or “The Silver Guardian”), which really upped the stakes, but also really left you hanging in the balance. END_OF_DOCUMENT_TOKEN_TO_BE_REPLACED