February 28th, 2019 in Anime, General Reviews by The Droid 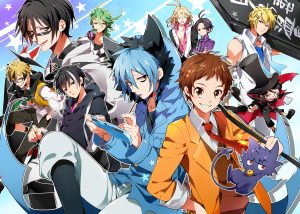 ‘Vamp’ is such an odd word, owing to the differing meanings. It can mean, to wit:

The word is derived from Anglo-French, alteration of avanpié, from avant- fore- + pié foot, but it can also be shorthand for vampire. In fact, the first vamp, silent movie star Theda Bara, was a caliber of vampire, as she sucked out men’s souls. END_OF_DOCUMENT_TOKEN_TO_BE_REPLACED 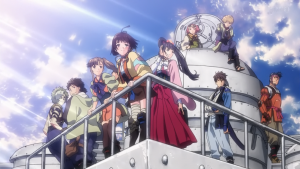 I see tons and tons of anime every day, every month and every year. I try and keep as good a record as I can as to what I’ve seen and what needs to be reviewed, so I was flummoxed that I had not given a review on this show. Bad boy! Bad boy!  “Kabaneri of the Iron Fortress” (“Kōtetsujō no Kabaneri”) can be best described as ‘Snowpiercer meets Attack on Titan’, but that falls far short as to what goes on in this zombie show. END_OF_DOCUMENT_TOKEN_TO_BE_REPLACED 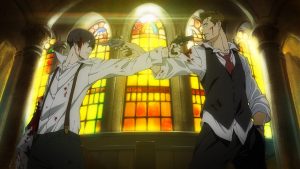 This particular anime is a rarity among anime in that (a) it is based in America and (b) it is set in the past. I used to lament that anime seemed to be most about a Japan of the future. There is a challenge in trying to do the past, especially one that Americans would be more familiar with, but at the heart is a story that is no different than any samurai epic like “Yojimbo” or “Kagamusha”. END_OF_DOCUMENT_TOKEN_TO_BE_REPLACED

One of the problems I have with an ecchi-heavy anime is that the perversion is so naked (both figuratively and actually) that you feel beat about the head and shoulders with it. But for this one, “Masou Gakuen H x H” (“Hybrid × Heart Magias Academy Ataraxia”), it is done with such a wide-eyed innocence, that you can’t help but laugh yourself wet, as if these people have zero concept on things of this nature. OK, let us to the plot: END_OF_DOCUMENT_TOKEN_TO_BE_REPLACED