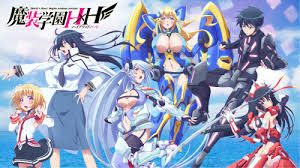 One of the problems I have with an ecchi-heavy anime is that the perversion is so naked (both figuratively and actually) that you feel beat about the head and shoulders with it. But for this one, “Masou Gakuen H x H” (“Hybrid × Heart Magias Academy Ataraxia”), it is done with such a wide-eyed innocence, that you can’t help but laugh yourself wet, as if these people have zero concept on things of this nature. OK, let us to the plot:

We are, as is the norm for anime, in the future. Hoverboards? Yoo-hoo, hoverboards? Nope? The Earth is attacked by invaders from another universe, who use portals to get where they need to get to in a big hurry, and are using weaponry that combines magic and science. Mankind’s weapons are, par for the course, completely and totally useless against the invaders. Cardboard armor would be more of a deterrent. Mankind must beat a hasty retreat from the land and developed these giant floating structures referred to as Mega Floats. Now, stay with me, it gets more fun.

A weapon referred to as Heart Hybrid Gear or HHG is developed, which is, magically, the only effective weapon against the invaders. A core is implanted within a person and by calling out the HHG’s name, one can summon an armor around them which can effectively combat these forces. Now, oddly enough, it appears that only women are able to fully utilize the powers and abilities of these weapons. However, onto the scene comes Hida Kizuna (that guy), who possesses a HHG, but it is not strong enough to make him particularly effective. His older sister, Reiri Hida, (that military type, second from left) calls him to transfer into the strategic defense school Ataraxia.

The ladies who are employed in the defense of the earth, Aine Chidorigafuchi (in white/silver), Hayuru Himekawa (in red) and Yurishia Farandole (in blue), have a problem and it is not those frightening weapons on their chest. Oh, that IS their chest! It takes about 30 minutes to destroy the enemy, but they only have power for about 20 minutes. When their energy reserves fall to 5%, they fall out of their fighting uniform. I mean, their uniform disappears. I mean, they swap out to their civilian wear! If they try to fight on to 0%, they die. What can be done?

It is discovered that Kazuna can act as a kind of recharge pack for the ladies. Although he cannot restore them to 100% power, the energy is of such a nature that it depletes at a slower rate, allowing them to see the battle to the end. Swell, what has to be done to transfer this power? You’ll love this…..

He basically has to sexually arouse them, engaging in strong foreplay and other calibers of canoodling, falling just short of doing the deed, to give them that surge of power. This is called a ‘Climax Hybrid’ and allows the ladies to unleash their Immoral Weapons or Corruption Armament. (Funny, I thought those were their breasts. Silly boy.)

The series contends itself with how they are best able to battle these space beasts and recharge as promptly as possible. Needless to say, this show skates as close to hentai as I have seen and there are a lot of shows that do that. I mean, there are certainly a lot of naked breasts being groped and fondled and ‘examined’ and a lot of thigh caressing and many orgasmic moments that the ladies have. And what is additionally funny is that the ladies can’t help wanting to be ‘upgraded’ more often, even when there is no need for it. The Academy, seeing the need for all this, basically has a rolling ‘love room’, where our two combatants can retire for 10 or so minutes and Shazam!

The funniest episode occurs when they decide to experiment with a double recharge. We would call this a ménage a trois or perhaps an FFM Three-Way. They call it a “Connective Hybrid”. But it is approached with the notion that this has never been done before in the history of the world and we have to see what happens, as we do not know if this approach will work.

This series is pure and unfettered fan service and it is easy to find an uncensored location for it. Let’s face it; if you are going to give us ladies with a couple of 200 megaton bombs on their chest, you have best show the goodies! The plot? Sorry, that was destroyed in the first battle with these space monsters.

And remember, it’s first run until you’ve seen it. I have to do what?