In the Known “Universe”

I was commenting on the sudden influx of outdoor animes. This is another of those outdoor shows, but, boy howdy, what a place to be going to! “A Place Further than the Universe” (“Sora Yorimo Tōi Basho”) is certainly grand in its scope and reach, although certain aspects fizzled a bit. But, let us venture forth! END_OF_DOCUMENT_TOKEN_TO_BE_REPLACED

I am not certain what starts a trend, but there is some trigger. Usually, one company does a particularly themed show, it really takes off and then everyone else rushes to produce a show in that area or sub-genre. I had this with a ton of biking shows a couple of years ago and now, I am seeing it with outdoor shows. I ran into a short pull series about girls who hike up mountains and now, I am given “Yuru Camp”(“Laid-Back Camp”). END_OF_DOCUMENT_TOKEN_TO_BE_REPLACED

I find myself drawn to crime drama animes, as there is enough going on to garner my interest and the evil guys can get genuinely evil. Such is the case with “Hakata Tonkotsu Ramens”. You may feel it is another hitman tale, but that merely scratches the surface. END_OF_DOCUMENT_TOKEN_TO_BE_REPLACED

August 5th, 2021 in Anime, General Reviews by The Droid 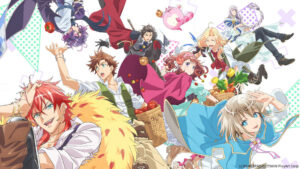 Hybrid shows are always a problem, in that they want to be all things to all people, but they are not always capable of fulfilling the promise. Such is what you get with ”Dame×Prince Anime Caravan” (also known as “Damepuri”). It wants to be both dramatic and comedic, but it just doesn’t know the best way to pull it off. END_OF_DOCUMENT_TOKEN_TO_BE_REPLACED