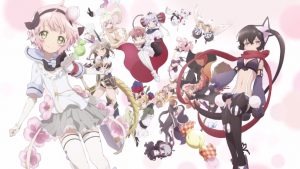 I have noticed another trend in anime. This one was a long time coming, as a lot of companies are not too eager to get on the bandwagon for this one, but it is best described as “Magical Girls Gone Bad”. One could argue that “Black Rock Shooter” is a caliber of magical girl show, and things in it went badly for those involved. It has gone through a lot of other shows to get us to “Mahou Shoujo Ikusei Keikaku” (“Magical Girl Raising Project”). This does give pause as to whether or not you wish to follow in this profession. END_OF_DOCUMENT_TOKEN_TO_BE_REPLACED

I am really going to ignore all the suggestions and intimations that this is a yuri show. Yes, it is very heavily tilted towards the troubles and tribulations of the female portions of this high school orchestra. Yes, the tales are about friendship and betrayal and wants and needs and desires. Yes, the ladies do wear a caliber of flirty outfits that tends to emphasize things, but since I feel it lacks a key ingredient to have it go over to the yuri side, “Hibiki Euphonium 2” is just showing us more of the problems that we saw in the first season, now made manifest in the second season. END_OF_DOCUMENT_TOKEN_TO_BE_REPLACED

OK, it takes a little while to wrap your head around this series, but once you do, wow, this is a fascinating series. Welcome to “Drifters” (“Dorifutazu”). END_OF_DOCUMENT_TOKEN_TO_BE_REPLACED 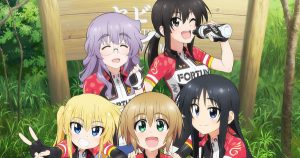 OK, I allowed myself to be suckered into this show. I mean, not only is it a sports show, it is also what I call a Squealing Girl Show, as a divergent bunch of ladies find a commonality and bond. In one sense, this show is NO DIFFERENT than “Roar!” That show was ladies on motorcycles; this show, “Long Riders!” (“Rongu Raidāsu!”), is girls on bicycles. END_OF_DOCUMENT_TOKEN_TO_BE_REPLACED