Historical drama in anime is few and far between, as there is always some kind of twist to it. You want real history? Go to the History Channel, OK? “Samurai Champloo” certainly is the king of AUHD (Alternative Universe Historical Drama) in that it takes modern sensibilities and imposes it on, in their case, the samurai era. The same thing goes on with the dramedy “Shine On! Bakumatsu Bad Boys” (“Bucchigire!”) END_OF_DOCUMENT_TOKEN_TO_BE_REPLACED

One of the freedoms you get with doing an Alternate History/Universe series is that you are untethered by anything concrete in the real world to tell your tale. One drawback is that you may have to rely on pseudo geography and country names to help with your story. Thus is the conflict generated by “Shoukoku no Altair” (“Altair: A Record of Battles”). END_OF_DOCUMENT_TOKEN_TO_BE_REPLACED

I feel that I will never understand the magnitude on the Japanese psyche regarding WWII and the dropping of the bombs. It permeates every fiber of their being and colors almost everything they do, consciously and unconsciously, even so many years after the events. We have another film that looks at the war experience, but it is done in a different manner. The inevitable comparisons between “Grave of the Fireflies” and this one, “In This Corner of the World” (“Kono Sekai no Katasumi ni”) will happen, as both are depressing, but the latter approaches it in a more hopeful, but less natural-looking, manner. END_OF_DOCUMENT_TOKEN_TO_BE_REPLACED 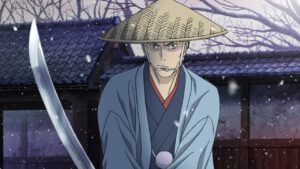 It is often said that Edgar Allan Poe brought us the detective fiction novel, although there had to have been some kind of investigation and detection into crimes long ago and far away. It gets tough to put together these tales about the past, as we here in the modern era do not know how they might have done things in those days and for our tales, it was when Tokyo was Edo (sadly, that era spans 1603 to 1868, so it is hard to give a specific date). However, what we see in “Onihei” is a marvelous crime story, set off with beautiful imagery, smart story-telling and one sharp fortune cookie. (Yes, yes, I know that the fortune cookie is an American invention.) END_OF_DOCUMENT_TOKEN_TO_BE_REPLACED

Wow, I’ll be honest, I did not think I was going to like and/or enjoy this series, and there were some fits and starts to it, but once it got on track, it became rather compelling. We are talking about “Saga of Tanya the Evil”, (known in Japan as “Yōujo Senki”, “The Military Chronicles of a Little Girl”) and it is not as straight-forward as you might think. END_OF_DOCUMENT_TOKEN_TO_BE_REPLACED

OK, it takes a little while to wrap your head around this series, but once you do, wow, this is a fascinating series. Welcome to “Drifters” (“Dorifutazu”). END_OF_DOCUMENT_TOKEN_TO_BE_REPLACED 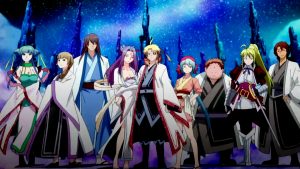 Another long-time staple of story-telling involves a journey. Not merely a journey of distance, but one of emotional growth or of physical prowess or even of understanding your place in the cosmos. And I’m not talking about a trip to the local Starbucks for a $3 Pumpkin Spice latte or even all that walking to hatch an egg for ‘Pokemon Go.’ I am talking time and space and voyages and struggles and trials and tribulations and all that other stuff that makes life more interesting than a $3 PSL at Starbucks. Now, after this rather loquacious introduction, let’s get down to brass tacks. END_OF_DOCUMENT_TOKEN_TO_BE_REPLACED 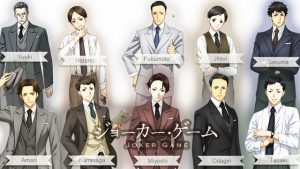 With all the genres that are afforded to anime, the spy thriller is one that is badly underplayed. Perhaps someone feels that they can’t compete with a James Bond or a Jason Bourne, but it doesn’t have to be that way. In fact, the only other spy series I saw, “Night Raid 1931” was more of a fantasy/supernatural, as those people had special powers and abilities. What if we take a special caliber of person, one with a clear idea as to what is expected of them, and mold them into a strong agency? Thus, the idea behind “Joker Game” (“Jōkā Gēmu”). END_OF_DOCUMENT_TOKEN_TO_BE_REPLACED

November 12th, 2015 in Anime, General Reviews, Mushi Shi: Next Passage by The Droid

I was honestly not expecting a second season from this quarter, but we have “Mushi Shi: Next Passage”. For the first season, I felt they were just tales of the weird and of these odd creatures called Mushi. It wasn’t until the second season that I saw it for what it really was: a caliber of horror. But it is done in a deliberate way, and not relying on gore and dismemberment and other bloody tropes that bedevil many horror shows. Intellectual horror? That’s a good term.

Ginko is still wandering the countryside, trying to help people in regards with their Mushi issues and always working to expand overall knowledge of them. The opening credits show a variety of Mushi. Take note, as you will be seeing most of them throughout the season. This also had something that I never thought I would see: Ginko lose! One thing that bothered me throughout the season is that Ginko seemed surprised. Look, if he has been a Mushi master for 15 to 20 years (how old is he, anyway), nothing should come as a surprise. I will let you get away with “I have never encountered this before”, as it is a big world out there, but he should never be shocked or surprised or perplexed…except the episode where he loses (Episode 17 – “Azure Waters”). END_OF_DOCUMENT_TOKEN_TO_BE_REPLACED For the most part, the church tolerates her (barely), but when war comes to this part of the world, she gets on her broom and conjures up spirits to send the English packing. Well, this does not bode well for her, either with the Church or with God. No, He doesn’t make an appearance. Besides, who would do the voice? Chris Ayres? Brrrrrrrrrrrrrrrrr! Seriously, Archangel Michael comes down to threaten Maria not to use her magic in public, as it is an affront against God. He sends a minion of his to watch over her, Ezekiel, a rather slight girl, to do what she has to do to stop Maria, up to and including dispatching her, if necessary. END_OF_DOCUMENT_TOKEN_TO_BE_REPLACED