October 31st, 2019 in Anime, General Reviews by The Droid

Now, there are a ton of shows out there about getting hooked into a video game or being transported to a distant land and place, where you have to make the best of a bad situation. And if anyone can tell me why there is always a medievel flavor to it, I’d appreciate it. My suspicion is that it is the use of magic, which seem connected at the hip with the era. Anyway, this is where we find ourselves in the montropaciously titled “Re:Zero kara Hajimeru Isekai Seikatsu” (“Re:Zero − Starting Life in Another World”), and, brother, not only is he starting, he’s starting over. END_OF_DOCUMENT_TOKEN_TO_BE_REPLACED 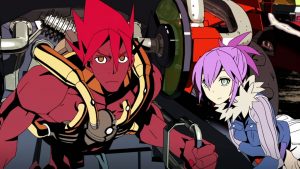 Is this another in a long line of “Episode #0” shows or just a free form experiment? I can’t really tell, as so much was left out, that it operates no better than a recap show, rather than an origin episode or even an OVA. You have your ticket? Good, come sit next to me; I’ll get two dogs and two brews and we’ll watch “Tailenders” together. I got us some good seats. END_OF_DOCUMENT_TOKEN_TO_BE_REPLACED 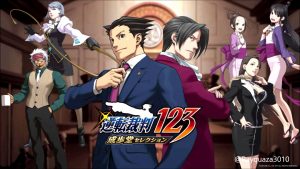 Some tales and genres really lend themselves to be translated over to shows; others are not so friendly. I have found that 4-komas and video games can’t always make the jump to light speed, so to speak, and they betray their origins. This is never more so than in the offering “Gyakuten Saiban: Sono “Shinjitsu”, Igiari!” (“Turnabout Trial: I Object to That ‘Truth’!”), as the problem is, no matter what they call Naruhodō Ryūichi, we know him as ‘Phoenix Wright’ (and he is referred to as such on more than one occasion). END_OF_DOCUMENT_TOKEN_TO_BE_REPLACED 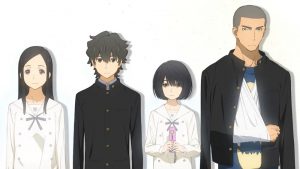 I always have a problem with anime movies, in that I am aware of the merest tip of the iceberg that comes to a regular cinema on its own (although I am having troubles with “The Red Turtle” and that’s a Studio Ghibli offering). A tremendous amount of them just go drifting past, so it is a bit or a workout to be able to find them without having to go to some special showing in a theater no one can find at exorbitant costs to view it and you have but one weekend to grab any of the four total showings. And the next nearest theater for it is 600 miles away. That is why when I run into an anime movie, I grab it and take my chances.

Such is the case with “Kokoro ga Sakebitagatterunda” (“The Anthem of the Heart”, subtitled “Beautiful Word Beautiful World”). At its heart, it is a love story, but how we get there is a tad unusual. END_OF_DOCUMENT_TOKEN_TO_BE_REPLACED

I am seeing a lot of music animes popping up, and it’s not just folks wanting to be the latest idol band or boy group, but real musical dedication. After having seen “Your Lie in April” and bumbled through two season of “Hibike! Euphonium”, I decided that I would try out “Piano no Mori”, (“Piano’s Forest”) although it is a strange confabulation of events. Also, it’s an anime movie and you know my stance on them. I will watch it and decide later if it was worth it, as they get such a limited to no release at all in the US END_OF_DOCUMENT_TOKEN_TO_BE_REPLACED