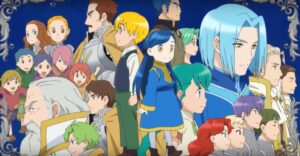 The thing about this show is that it slid right into the second season with nary an introduction to it. Well, in a sense, but there was the two OVA side stories, but it really is more of a second season than a mere extension of the first season (more on that later), so we are continuing with the isekai of “Ascendance of a Bookworm”, (“Honzuki no Gekokujō: Shisho ni Naru Tame niwa Shudan o Erandeiraremasen” or “Ascendence of a Bookworm: I’ll Stop at Nothing to Become a Librarian”).

Our daring, young heroine, Myne (or Mine, again, whomsoever is doing the subtitles, her of the blue robes), has managed to become a Blue Robe. This is very important, as it signifies that she is a noble (although she isn’t). Needless to say, she earns the enmity from the older Blue Robes (who still see her as a commoner and, worse, a pretender to nobility) and the gray robes (people who are in the faith, but are treated worse than dogs in the streets). All Mine wants to do is read her books, and she does this to the detriment of her pernicious retainers (that’s them in the lower right-hand corner).

Once confronted with the grim realities of being in a position of authority, and all that responsibility, she works very hard to win them over to her side. You see, good food tends to soften the hardest heart, and she always shows her kind nature. She also embarks on a series of money-making projects to help the orphans (that’s the grouping in the upper left corner with those retainers.) The shock on both sides is how rigid and inflexible everyone is, a deeply entrenched society where upward mobility is a pipe dream at best and actively fought against at worst.

To be honest, Mine has the potential to be just as horrible as the nobility (pretty advanced for a six-year old, but remember, in reality, she is in her early 20s), as she uses the orphans as a caliber of ‘free labor’ to help harvest the plants necessary to make her paper and then have them create the paper. But they are rewarded with a decent place to sleep, good food (OK, anyone who wants to say ‘Three hots and a cot’, go ahead) and acknowledgement for their efforts, which culminates in the creation of picture books of their faith, taken from the more denser tomes.

However, her efforts do not go unnoticed, nor unpunished, as the Upper Tier Snobs try to ruin her and impede her progress, especially the High Priest (gray hair, lower left). But with an ally in the Head Priest (blue hair towards the right), she is shepherded through the intricacies of both the religious order and the ranks of nobility.

This, however, runs through treacherous territory, when, called upon to cleanse the land, is betrayed by the very soldiers detailed to protect her (like the two on the left side). Although I am loathe to give spoilers, the incident that you saw at the very, VERY first episode is linked back up and we now leave circular time (as this is all seen as a caliber of flashback) and the third season will be the linear story.

Although it gets better and better as it progresses, no one seems to question how this mere slip of a girl comes up with all of these ideas, as if these original thoughts never came to anyone else before, although Head Priest always had his suspicions. And most of the people here have the Kicked Dog Syndrome (if you treat a dog badly, they are wary of anyone, lest they be hurt again), so they are defensive and stand-offish. Most are won over, certainly not all.

The third season holds out promise for more conflicts and conundrums, as the Head Priest is, at best, a cypher, as we know very little about him and his ambitions and how Mine will go forward with her excess of mana.

Binging? The only reason I do not give the full OK for a full binge is that you do need to take a break, but it can certainly take on binging, adding an immediacy to what happens to her, especially with the ending arc of this season and the set-up for the next one.

And remember, it’s first run until you’ve seen it. Keep her safe.