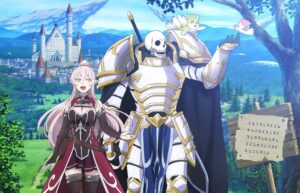 How many does it make for this year? How many for this month ALONE? Every time you turn around, there is another isekai, staring at you from the shadows or behind a tree or underneath the floorboards. Much like the cooking shows craze of a couple of years ago, this is one genre that just does not seem to be able to run out of steam and it can get quite tiring. How much more can you do with this, without it looking like a retread or a rip-off of some other isekai, which was already a retread or a rip off of another isekai? You have to bring something new and/or different to the table, OK. Well, perhaps that has happened with the entry of “Skeleton Knight in Another World” (“Gaikotsu Kishi-sama, Tadaima Isekai e Odekake-chū”).

Our initially unnamed hero awakens in this strange world, which was an online game for him. He sees that it is a game that he has played, but ponders how he came to be in it. Now, his gaming character was an 8-foot tall knight, with the body of a skeleton, and was a rather powerful force in the game. Realizing that people would freak out if they saw him as he is, Arc (as that was the name of this knight in the game) decides to keep his helmet on at all times, and will eat in seclusion. (Can a skeleton eat? I know they can’t drink booze, as it goes right through them! Hahahahaha!)

On his first day as an adventurer (as when you are plunked into these new realms, you haven’t got a gald to your name, so you need to get some scratch), he encounters bandits ready to attack and kill two maidens in the forest. Arc dispatches them and learns that the lady he saves from a grim fate is royalty. Declining any real reward (as he would have to remove the helmet and it all goes south), he gets a special travel pass, so he can traverse the country with little resistance. In doing his knightly duties, he rescues a green-tailed fox (atop his shoulder) and heals him. The fox is now twined to him and is dubbed ‘Ponta’.

Next, he meets that elfin lady, Ariane Glenys Maple, as she is trying to find her kind that have been kidnapped and are going to be sent into slavery. Since Arc wants to do good and help people, they join forces to try and discover who is/are the forces behind the trafficking and rescue whomsoever that they can.

Now, Arc is ridiculously overpowered for this game/life and dispatches people like Joey Chestnut polishing off a plate of hot dogs. A real caliber of humor happens when he is compelled to remove the helmet and people (as he feared) absolutely go bananas when they see him. One person thinks that he may be under a curse, but the magic they possess cannot overcome this issue.

The bulk of the story is him and his elfin friend saving kidnapped elves from trafficking, restoring their freedom and putting the bad guys to flight. All in all, a somewhat typical plot for these shows.

There is a caliber of charm with Arc and his issue. He WANTS to be seen, but he can’t, and so, he must remain hidden. Even those who know still find it jarring when the helmet comes off. This isn’t a bad isekai, and at some other time and place it might have scored higher, but these shows are underfoot to the point that they are starting to drag heavily, despite what is done to make it fresher. So, if you decide to chase after this one, go for the full binge. It can take it and it really helps the story along.

And remember, it’s first run until you’ve seen it. Am I cursed?