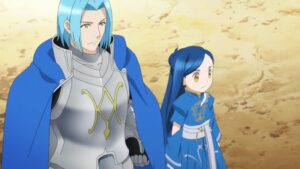 So, the third season of this show is out, but it poses more questions than it answers and whatever charm was in the first two season has gotten washed away, as the show moves in a different direction for “Ascendance of a Bookworm” (“Honzuki no Gekokujō: Shisho ni Naru Tame ni wa Shudan o Erandeiraremasen”, or “Ascendance of a Bookworm: I’ll Stop at Nothing to Become a Librarian”). So, onto the story.

We are getting close to winter, and the town, for all intents and purposes, shuts down, as the snow is thick and deep and unnavigable. The decision is made that Mine is going to spend the time at the cathedral. This also means that a lot of projects are on hold, because of the weather. Oh, they are all still a go, but now, the area of interest is colored ink. Sadly, this brings her afoul of the Ink Guild. Now, it is bad enough that she had a really good ink, as it puts whatever the Guild does to shame, but to have it colored? Unheard of. Blasphemy! (Or is it heresy?)

She also has to prepare for the Dedication Ceremony, which will cement her status in the Church, as well as the enmity of the High Priest, who falls into the trope of the higher up you are in the clergy, the more corrupt you have become, as you wield that power to you own vile ends..

All kinds of changes happen throughout the tale: mom is pregnant with Child #3; a foundling with The Devouring is laid upon the doorstep of the cathedral; Delia becomes more craven in being a spy for the High Priest; the Ink Guild engages in naked, open treachery upon Mine and her colored inks; kidnapping is not out of the question (You know, no morals, no guardrails). So, the third season is about all of these dramatic changes afoot in Mine’s life and how it causes more situations and conflicts than anyone had imagined or anticipated.

So, we get this Big Menu of Problems. Now, things like this happen in life, and it can’t always be sunshine and lollypops, but the fascination and drive of the first two seasons is buried under political motivations and a desire to exact revenge against those who choose to upset the established norms that keep the haves in power. In fact, the last four episodes are as far away from what you have come to expect of this series as can be. And therein lays the confusion.

Mine has to make a decision that upsets the apple cart (nope, if you wanna know, YOU watch the series), but we are presented with the contradictory admonition. At about the 20-minute mark of the last episode (#36), it tells us “The story to be told is over…After that,” OK, so we have concluded everything, even though we haven’t really reached the end. Then, with an epilogue, she is challenged to “…spread the printing business as a new industry throughout this domain.” And with about 5 seconds to go in the episode, we are reminded “To be continued…” So, is there a season 4?

In any case, go ahead and binge. Because of the political machinations, it really supports the story flow and that the problems do not go away just by snapping your fingers, but get intensified by the unrelenting crush of time and the desires of people, both good and bad.

And remember, it’s first run until you’ve seen it. This is my daughter.