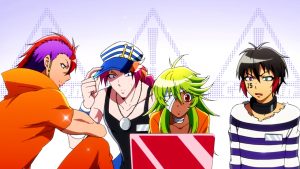 The “Apple” of Discord

Yes, I know this was a movie, but, for me, like “Ghost in the Shell”, the series made more sense than the film, although that’s where the similarities with “Appleseed XIII” end.

It is the future (and with what I see, it had pretty well damn be). It is also after the close of WWV (No, not some Super Bowl; World War Five). On the plus side, it was fought with non-nuclear weaponry. On the negative side, about half the world’s population died. Well, at least I can get a parking space. We have also seen the rise of the city-state of Olympus, a gleaming spire offering a way out of the chaos and destruction of the past and into a grand and glorious future. Or not.

It is governed by Gaia, an artificial intelligence, and administered by bioroids, genetically engineered humans. Isn’t that eugenics? Just askin’!
Into this mix we have the battle duo of Deunan Knute, a young female special agent, and Briareos, a veteran cyborg soldier. They are partners and, when Briareos was human, perhaps lovers, (this is hinted at but never really defined). They work in E.S.W.A.T., the elite Special Forces serving Olympus. They are deployed wherever trouble strikes. Conspiracies, terrorism, deadly military weapons technology, greedy corporations, and power-hungry politicians, whenever it rises its ugly head, they are there to strike a blow for the future as they fight to protect Olympus and conduct their personal quest to find Eden in the wasteland. (Enter patriotic music beneath). END_OF_DOCUMENT_TOKEN_TO_BE_REPLACED The show came in with a great premise: What if you could keep you hue clear? You see, the Sibyl System rates a person by the color of their hue (or stress level). If it goes over 100, you are to be taken in to custody for ‘rehabilitation’. If it goes over 200, the only cure for that is death, as you are a real latent criminal. The Dominator, that gun they possess, can rate a person’s hue and will allow you to shoot it. If the hue is below 100, it will not let you fire it. But you, as an Inspector, can override the gun’s setting and allow you to stun the person, not kill them. For some odd reason, that aspect is absent, so we are treated to a lot of people being killed. END_OF_DOCUMENT_TOKEN_TO_BE_REPLACED

November 15th, 2013 in Anime, General Reviews by The Droid Now, I haven’t been actively watching anime for too long (at a mere 10 years, I am a youngling compared to others), but I have to say that 2013 has been a very exciting year. Sure, there have been a few duds, but the standout shows really stand out, like this one, “Psycho-Pass”.

It is the real future, as it is now 2116 (most ‘future’ shows are like 2040 or 2051, years that I have an outside chance of getting to see, only to discover there are STILL no flying cars). Don’t let the open throw you. Aside from it trying to look like “Blade Runner”, the opening fight is something that will occur about two-thirds into the series run, so just let it wash over you until you get into the actual story.

Tokyo is a utopia of harmony and understanding, sympathy and trust abounding; the dawning of the Age of Aquarius. Crime is almost non-existent, owing to this Sibyl System. You can kind of think of this world as ‘Minority Report’, but without Tom Cruise. People’s emotional state is measured by their Hue. Stress certainly plays into this assessment, done by the multiplicity of tracking cameras and Drones that patrol the streets. END_OF_DOCUMENT_TOKEN_TO_BE_REPLACED