COMMENTARY – To Binge or Not to Binge? 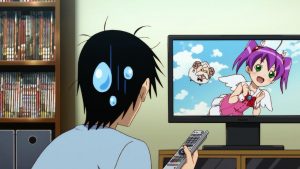 Now, you need to understand that I am Old School. Hell, I’m Ancient School. I’m so old, Plato taught me at the Academy himself! I come from a time that when we got a FIFTH TV station in our area, we lost our collective minds. If you missed an episode of your favorite show, you had to wait half a year for the summer reruns to catch it. And if your show was cancelled, that really was the end of it. Home taping? Maybe with an AUDIO cassette recorder, perhaps a Super 8 camera pointed at the tube.

Today, I can come in 10 minutes late for a show, ‘rewind’ the episode and catch the whole thing. With so many streaming platforms, I can watch something on my smartphone on the commute to work (well, I can’t, as I am biking and I might get t-boned by some Cadillac Escalade). The ability exists for me to watch practically anything I want, at any time I want. No more 2 am insomnia and be at the fate of whatever is showing on Why Are You Up? Theater. (Great, “The Incredible Stinking Blob from Galaxy X”. Again). I have been doing these reviews for a few years now and have decided that I needed to add a new category and that is “Bingeability”.

Now, as a reviewer, I gotta catch ‘em all when they come out; otherwise, I am late, late, late with my reviews and it may come across like that last lonely donut in the shop at the end of the day, just a bit on the flat and stale side. Certainly, when the whole series is out there, you can do as you wish. And I kind of binge, anyway, when I watch. I always catch two shows, as I find it helps with the flow of the plotting and I have the time for it (well, when I’m not downloading porn writing fan fiction). It’s just I don’t always have three or four hours in a row to donate to grab it all in one session.

In an open sense of the word, you can binge anything. If you want to spend a weekend watching all of “Tokyo Mew Mew”, well, I’ll be in the kitchen with Dinah, strumming on the old banjo. However, some shows really lend themselves to binging, while others are a workout to the point that it ain’t worth it.

To wit, anything that I have noted as a genuine short-pull show (not more than 10 minutes an episode), you have to binge them to really get the feel for them. “RWBY” is an excellent candidate for this. I knocked out Season One during a vacation time day and it helped the show make sense. Ditto for others like “Space Ship Tiramisu”, “Space Patrol Luluco” and “Miss Monochrome”.

Even regular series can benefit, especially comedies. But not all comedies. “Ninja Nonsense” is a very silly show, but the episodes are independent of one another and binging would not really work. A personal favorite, “Nerima Daikon Brothers”, actually shows a lot of the flaws and shortcomings from putting together five or six shows.

Dramas are problematic, as you need a chance to catch your breath. I tried putting together four episodes of “Attack on Titan” and it was more than I could handle. On the flip side, “The Promised Neverland” NEEDS that unrelenting anxiety to really bring forth the power of the show. Or, in the interchange from “Apollo 13”:

It all depends on two things: Can the show deliver it? Can you take it all in?

“Akito the Exiled”, a five-part movie, can, should, must, be binged to take in the full flavor of it all (give yourself 5+ hours for that one). The three-part “Godzilla” movie, not so. I found it worked better as a three-night treat, as it gave one time to digest what went down before the next installment. The suggestion to binge will not affect the overall review. Good is good and bad is bad and no amount of binging is going to make a bad show get good. It could, however, make a good one not as good. Some shows are geared better for that week-to-week grind. It’s just if you are one of those weekend warrior types, it’s just another tool to help you decide what to see and how you wish to address it.

As an addendum, when I go to anime conventions, they show three or four episodes in a row (but not the whole series).

And remember, it’s first run until you’ve seen it. Even if it is all at once.