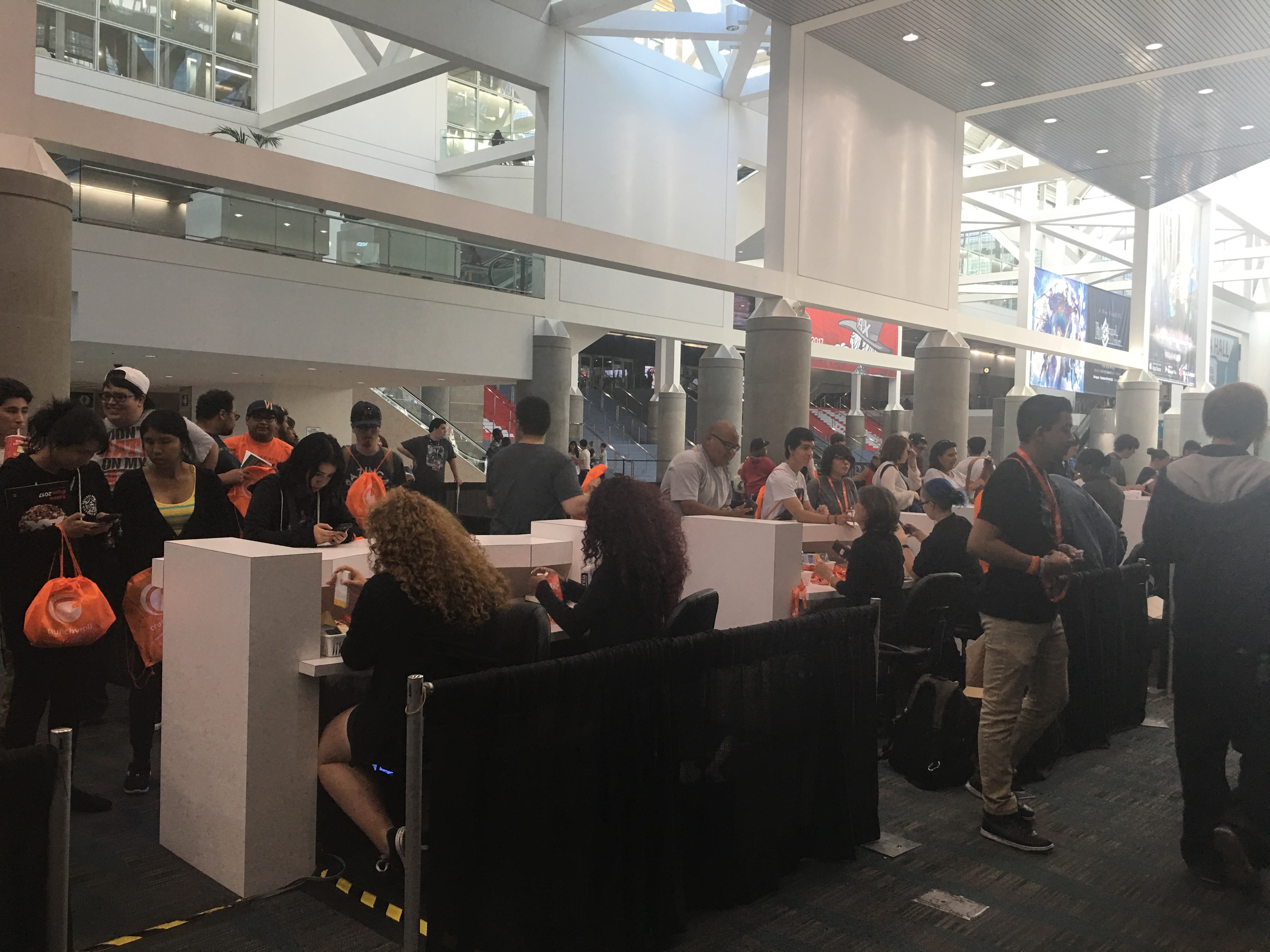 I approach this convention with a great deal of trepidation, as it hasn’t been as smooth as I had hoped for. There was the near-fiasco with the hotel room and the eventual demise of the press pass (it seems I didn’t meet the standards, but they were vague as to what part of it I missed). Then we had the pre-trip prep and that is always chaotic, even though I took three days to pack my bags. It’s not the big stuff (like clothing), but the small stuff (like all your medicines and a bar of soap) that cause the sweats.

And you cannot forget The Trip itself. Now, considering where I am, it isn’t that harsh. OK, driving down Highway 5 may not be the finest experience to encounter (especially when a heat wave and Coalinga merge. Oh, for those who do not know, Coalinga is basically the biggest cow patty in the world. You will smell it long before you see it and it is a misery for both nose and spirit), but some folks are flying in from all over the world and a 12-hour flight is far worse than a 5-hour drive (the wife is a maniac on this).

So, I get up at zero dark thirty to clobber some last-minute things and get the family moving, so we are on the road just a squish past 6 am (just enough time to hit up the nearby Starbucks). The drive was not too bad, but the daughter wanted to meet a friend who was going to Fullerton. I wanted to get to the hotel, get the tickets and veg out. Not on my watch! We got back on the road a smudge past 2 pm and allowed Siri to guide us there. We ended up taking what I thought was the long way around, going via the 210. My thought was get on the 188 to the 405 to the 101 and grab the 110, dumping off at 4th St. But the wife and the daughter said they had faith in Siri. It’s just when it took us off the freeway to ‘save four minutes’ and onto surface streets that I got knickery in the knees. We took a marvelous tour of Glendale and its less glamorous side streets that I had my doubts. I later found out that a plane had crash-landed on the 405 freeway and snarled up traffic all day long. But that was the worst 4-minute time savings I ever got.

Now, we got to the Westin Bonaventure Hotel and Suites and it was a massive zoo. No one was moving AT ALL, but I was genuinely shocked at the sheer amount of people checking in. This is a higher range hotel and the place was packed. We ended up on the 17th floor and when I opened my drapes I was shocked at my view. It appears most of downtown LA is under construction and I mean a steaming pile of it. After we checked in, we headed to the venue. I spoke to a load of people who said they got their badges in 15 to 30 minutes. Yeah, but that was at 11 am; we are closing in on 4 pm. On the bus to Staples/LA Convention Center, it’s all torn up streets. They are putting in more subway lines and there has to be a dozen buildings going up or being refurbished for either new condos or more hotels. I was terrified on the bus, as the driver knew what they were doing, but it was a lot of brinkmanship driving and blind lane changes and pushing the lights. Well, he has been doing it all day, so have a bit of faith, chucko.

We got off the bus and headed for the line. The last time I did the getting the tickets, aside from it being a billion degrees, it took me 140 minutes to run the gauntlet. This time, from when I got off the bus to when I got out of the building took 30 minutes and the actual in-line time was 19 minutes. I mean, we were practically sprinting through the line. Now, they did have a Day -0 and a lot of folks took advantage of this, and they had much longer hours to get ahold of your tickets, so that might have helped with things taking so little time. One new thing that I learned was something they were doing regarding +18 venues. I still have to figure out a way to get into those panels, but with the Green Band I now sport, this means that they are not going to waste time checking countless IDs to see if I am old enough to get into a discussion of hentai. I have been seen and approved once, so all I have to do is get into the line in enough time to get a seat.

I chose not to do Day ¼, not just that it was an extra $10, but there wasn’t anything really worth taking in and it was only for 6 total hours. The Big Ticket Item was the Anisong World Matsuri and that was a completely separate ticket. It featured four ‘super-kawaii girls’ units (Aqoura, ID@LMASTERS CINDERELLA GIRLS, Wake Up, Girls! and JUNNA) and I think it sold out. There were some panels (Full Metal Panic’s 15th Anniversary, Miss Kobayashi’s Dragon Panel, Evangelion Origins) and a ton of animes that I have seen and reviewed, so I was glad I passed it by, but I was also dog-tired. I grabbed the bus back to my hotel, and that part is swell, as it is a genuine straight shot, right up Figueroa and dropped off in front of the hotel.

Day 1 starts at 9 am, but those are animes that….imagine that…that I have seen and reviewed. I’m toddling off to bed, but more to come tomorrow, including the bête noire.