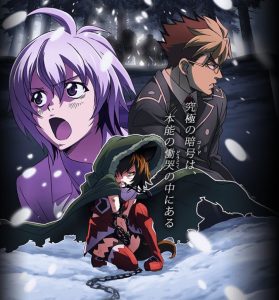 It’s time to notice new trends! What is the new trend that I am seeing? “Episode #0”!

You may call them ‘one-shot’ or ‘test balloons’ or ‘toss-offs’. They are NOT OVAs, as there has to be a series tied to it before it can be an OVA. Yeah, yeah, sure, sure. We can argue that an OVA has honestly nothing to do with any given series, so, in an open sense, it is an OVA. But I have seen them tied to a series, so I consider them part and parcel of the whole series effort and not just some one or two episode escapade to see what can be done with a story.

But I have seen enough of these “Episode #0” that later became a series of some caliber, so I have my thoughts. I feel it is done to see if there is enough interest in the special to decide to convert it into a full-blown run. Such is the case with “Luger Code 1951”.

Welcome to 1951. Definitely no hoverboards. We are currently in the Ardennes Region of Europe, where three soldiers are dragging along a caliber of wolf-girl (the grumpy one in front; we’ll call her Yonaga). Look, if you were chained against your will and yanked along in the freezing weather, snow eddies swirling about you, dressed like that (she is also muzzled), you’d be a tad out of sorts as well.

They are being followed by Sergeant Alex Rossa (him to the right) and Professor Testa Lielbert (him to the left). Him to the left is a young genius university professor (at 17!) who is able to learn any language. He is asked to decipher a code used in wireless communication: the Luger Code, developed by werewolves, enemies to mankind.

We do not fully know how this war developed, but it was an offshoot of WWII and has been a pitched battle these last six years and the werewolves appear to be winning. Yeah, they are much stronger and have those big, nasty, sharp teeth and appear to be impervious to regular weaponry (silver is a rather costly metal for bullets).

Startled to find that he has difficulties in deciphering the code and desperate to study it, the professor embarks on a journey to capture a living werewolf to aid him and learn this language directly, rather than from questionable recordings and general uncertainty.

This is a classic origin episode, as it has all the elements in place to send us off into the full series, but it was a mere three-chapter manga in its original form. Whether they wish to pursue this as a full episode run is another matter, but it certainly has enough interest in it to potentially warrant such a decision.

I do not wish to tip off too much here, as I would like you to check it out. There is enough action and story line to pique your interest in it. I do not know if a petition to the company would help, but I would like to see more of this series. You should see it as well.

And remember, it’s first run until you’ve seen it. Wait up for me.