September 26th, 2019 in Anime, General Reviews by The Droid 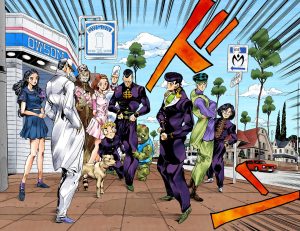 I lie to myself all the time. “The check’s in the mail.” “Yes, I took out the trash.” “I know I told you that.” After getting treated badly by the last JoJo’s Bizarre Adventure, “Egypt Hen”, I swore I would never see it again. Well, guess what happened? Yup, yup and more yup. I found myself watching Installment Series Five or Six, “Diamond is Unbreakable”.

It is about ten years since the conclusion of the last show (but we’re gonna party like it’s 1999. Oh, it IS 1999. Definitely no hoverboards) and we are in Morioh City. Jojo and Joestar are coming to town. You see, Joestar has gotten really old really fast (he’s third from the left, looking like a bum). Many years earlier, he stepped out on his wife and got some damsel pregnant. He is coming to make a caliber of peace with both her and the son he’s never met.

However, there is evil afoot in this town and that manifests itself in a minion of Dio, who is making Stand users. That particular person possessed a special bow and arrow that can turn any regular person into a Stand user (normally, you are born with the condition). One drawback? The arrow could kill you instead, so you end up taking a chance you didn’t want to. The ‘hero’ of this series is Josuke Higashikata (third from right). I was going to say ‘the guy with the crazy hair, but they ALL have crazy hair. PS, don’t insult his hair. If you thought Ace Ventura didn’t want you messing with the ‘do, Josuke is far worse.

Anyway, a Stand User kills Josuke’s father, as he was a cop and put that guy away. Josuke uses his Stand to mete out some harsh justice. One of Josuke’s friends, Koichi Hirose (short blond just above the dog), is shot with the Bow and Arrow and is dragged into a house, where Josuke, in order to rescue him, must do battle against the Nijimura brothers, Okuyasu and Keicho (we see Okuyasu up there, with the “$” on his chest). Well, things go badly for the brothers (one dies) and the other decides to throw in his lot with Josuke.

I set up a lot (this covers the first five episodes), because the rest of the series contends itself with having to not only deal with a variety of Stand Users who go a bit berserk with these new-found powers, but it also propels us to the lion’s share of the story arc, the Yoshikage Kira tale, about a serial killer that has been terrorizing this town for at least 15 years and probably longer.

It’s just that the series gets frustrating. You have a rather potent foe that has boxed you into a no-win situation, but you somehow come up with a solution to beat it and YOU take the victory. I know that the series is rather fanciful and…dare I say it….bizarre, but you still need a basis in reality for it to work better. Another thing is the artwork.

I complained about the last series, in that everyone looked buff. Even Grandma looked like she could bench-press a Mack truck. In this approach, it’s all so weak and flaccid. There is a definite softness to the series, which helps to support the idea that it’s all rather fuzzy. No bold colors, no strong lines, no force of will. The only thing I will give it is that we finally have an ending that I am satisfied with. Shows like this leave a tiny crack for the villain (or one of his entourage) to come back and seek revenge and ply their evil trade or eat up all the cashews from the mixed nut tray. Seriously, justice is served.

I am sure there will be another, another, another series in this franchise, but it had better be incredibly better than what we got here. Not bad, but could have been a more forceful entry. One interesting aspect they did at the middle or the end of the episode was the ‘Landmarks of Morioh’. These are locations or things that are related to the particular adventure you just saw, but since WE know the truth behind it, it makes more sense for us.