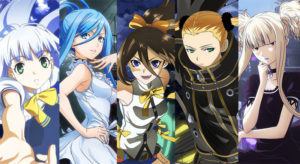 We have before us another example in the current trend of ‘concluding’ a series with a movie or two. I mean, the same effort goes into a movie as a series, but I guess they feel they can control things better with a movie. I also have the lurking suspicion that they can trot out a ‘special engagement’ viewing party and charge far more at the cinema for this, with one of those ‘weekend’ showings….provided you live in or near a city that would do this. If you are in East Powdermilk, Wisconsin, you could be out of luck.

We are continuing the saga of “Arpeggio of Blue Steel”, with this offering called “Ars Nova DC”. Now, since we are dealing in musical terms, ‘Ars Nova D.C.’ might be confusing to those not so musically inclined. But if you know the terms, it explains the movie a bit better. ‘Ars Nova’ means ‘new art’, although we can take it to mean ‘new technique’ and it represents a break from the style of music that preceded it. ‘D.C.’ is ‘Da Capo’ meaning ‘from the beginning’. It is a notation to play a musical phrase from a certain point again, kind of like a repeat. This movie is all that and a bag of shrimp-flavored chips.

Oh, some of you may not be familiar with the series itself. Quick recap: humanity, via global warming, had reduced the amount of landmass, owing to the rising tides. In 2039, an alien force called The Fog came down and defeated the world, but as Iowa-class battleships, so the world is badly isolated from itself. Now in the year 2056, Gunzo Chihaya captains the I-401, which was a Fog submarine. Iona, the mental model for the craft, is on our side and they battle the Fleet of Fog, employing their renegade style and massive disregard for protocols.

I-401 completed its arduous journey from Tokyo to San Diego and got the prototype of the vibration warhead to the US, where it can be manufactured in vast quantities and allow the remaining ships in the world fleet to finally send The Fog packing. Along the way, either through sheer dint of personality or perhaps he’s one swell guy, Gunzo managed to get several Fog captains to defect and support our side. And that is one strange harem that he has managed to accumulate.

The problem with this film is that is it a caliber of recap of the first season with about 30 or so minutes of new footage to explain things, thus your Da Capo, as we have, in a sense, repeated everything from the beginning. But you are trying to cram 300 minutes of series into 105 minutes of movie (or, technically, 75 minutes), so things are going to get ignored, run over, poorly explained or generally ignored. My stance is to watch the full series, so you can understand the rather complicated dynamics of the interpersonal relationships, not only with Gunzo and Iona, but with the crew and how they have to deal with both the bureaucracy of the Naval Leadership and the cunning wiles of the Fleet of Fog, who may not be all that smart.

Still, some aspects of things are explained well, so it isn’t a complete loss, but I have never been a fan of recap movies. As I said, if you want to understand the movie better, take out some time for the series. Is it a good watch in its own right? It’s that I cannot tell how CG it all is. Certainly the ships are done so and it feels like the characters are predominantly the same. CG has that lack of fluidity, so it all looks a bit jerky, but other times it feels like traditional 2D. But if you notice it or feel it, it can distract from the overall good story. However, we have not reached the honest conclusion and a revelation right at the end of the film makes watching the conclusion of this saga mandatory.

I also wonder if Gunzo is actually that good of a captain or if he merely understands the rectilinear nature of the Fog so that he plays on their weaknesses to defeat them. There are a lot of ‘I don’t understand’ moments with the Fog, but they never have any real desire to try something different. They are locked into this Admiralty Code (kind of like the Prime Directive), so independent thinking is not allowed and openly discouraged, so, unable to think outside the box, they are regularly defeated. Then they have tea and stew on things and dive right back in to make the same mistakes again. And have endless cups of tea again.