December 23rd, 2021 in Anime, General Reviews by The Droid 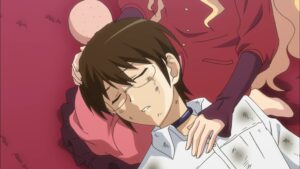 The third season of “The World God Only Knows” has been put on a different track than what we have come to expect, starting with the subtitle “Goddesses”.

The world of the goddesses and the demons is one, apparently, of endless conflict, striving to see if the world will live in community or in chaos. Walking amongst us are goddesses within people and one of them resides in Katsuragi’s childhood friend, Tenri Ayukawa. But Katsuragi has a more difficult task: he has to discover which ladies in his school are harboring the goddesses within them, before the evil forces of Vintage get to them first, in order to release the Weiss and bring havoc to all around. Geez, that’s a bit heavy for what is a light comedy, right?

The real trick is that Katsuragi has to get them to fall in love with him while the others know that he is trying to do this. So now he is seen as a player and has to do an incredible plate-balancing act to make it all work right (while absorbing more physical abuse).

For me, the third season did not work as well, as we discarded the comedy. I mean, we have humorous events happen, to break the spate of the more sober realization of things, but the sheer stupid comedy of the past two seasons is now riding the pine. This is one serious workout and there are times that is appears he will fail (he won’t, but it’s more trouble that he has to go through).

We also see some serious emotional growth for Katsuragi, but I wonder how it might affect things down the line. True, he is not significantly closer to his goal and that means a fourth season (the OVAs are going down just like that, so it’s not an extra partial season of something to extend a seasonal count) is out there, so I am concerned how it is going to alter how he approaches everything in his life. Or I could be wrong and this is Game Over.

I still would have you see the season, but be prepared for some harsh truths and cruel realities that will befall Katsuragi. Because of this, it makes binging very hard to watch. I even had difficulties putting together two shows. If you are made of sterner stuff, then go ahead. I can’t do it for this version.

And remember, it’s first run until you’ve seen it. I will find her.