October 15th, 2020 in Anime, General Reviews by The Droid 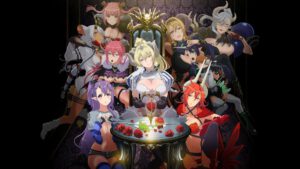 We are in Hell. No, not Cleveland or Winnemucca; the real, honest-to-Satan Hell. You see, Lucifer (blondie in the center) used to be the first of the Archangels of Heaven and the former leader of the Seven Lively Virtues. Note that I said used to. Well, she contravened what God wanted, lead a rebellion against Her and was cast out. Yes, I said Her. In this incarnation, the Seven Mortal Sins are all ladies, ladies with immense power, ladies with immense egos, ladies with immense jimmies. Although you can see some of them here, Belial (that’s her in the upper right) has got absolute weather balloons, and they barely get covered.

Note the rest of the skimpy outfits. Barbie outfits use more cloth! Anyway, Lucifer falls from heaven, to earth, via a church, where she sees Maria Totsuki (nope, she’s not up there). In Hell, Lucifer battles Belial for supreme supremacy, but loses and has her angelic powers chained. But this now makes her a demon lord and her new quest is to take over Hell and be the new queen on the block. She takes Leviathan (purple hair, lower left), returns to earth and stabs Maria (the girl in the church, remember) through the heart.

Ahh, but Lucifer has plans and encases said maiden’s heart in a glass phial (on the table, near the apple and grapes). After some naked sexy hijinks, they go on their epic journey to defeat the six remaining Mortal Sins (for the record, Leviathan is a minor demon and Lucifer is the Sin of Pride) and get a chance at the Showcase Showdown.

The only reason you want to find an uncensored site is that the Demon Circles of Decency and Protection get annoying, as the ladies are naked, naked, naked or the outfits they have on are risqué, risqué, risqué. And the actions they take….

The problem is this: whatever story that was to be told about faith and sinning and the value of one’s soul is pushed out of the airplane at 50,000 feet by the relentless, overwhelming and (dare I say it) not particularly good fan service. Yes, they are big and they are busty and they are naked and they are canoodling about and groping and fondling and checking out the hardware and subjected to all kind of window-fogging, tongue-dragging, eye-popping perversions that have you ready to rewind to see it again, just to make certain that what you have seen IS what you have seen. (Episode 10.5 is highly recommended if you wish ‘a special clip episode highlighting some of the lewder scenes in the series’).

It’s just that Lucifer has to be not only a bigger pervert than whomsoever she is dueling against, but she has to be vastly superior in these battles. A mere defeat is not enough; it must be utter (can I say soul-crushing?) humiliation, so as the series progresses, it gets more and more fantastical to the point that you wonder why there are trying so hard to get them naked. And the final, final, absolutely final final battle kind of drags on and isn’t that interesting as far as battles go. Ooops, we’re just here for the nudity. Who needs a plot? Yes, indeed. And with that admonition, I vote against binging.

It’s the fan service. It is ridiculous to begin with, so a lot of it may start wearing on you sooner than later. I mean, it’s Perversions on Parade and the thing about fan service is a little goes a long way. You might get so tired of the whole thing that you give up and just stare blankly at it. Start with a two-episode treat and judge from there. If it wasn’t that I was watching to review, I feel that doing one a day for the full run may work better on all levels for you. Unless you have a great seat for the Perversions on Parade extravaganza and want to take it all in as fast as you can. Your call.

And remember, it’s first run until you’ve seen it. I will rule them all.