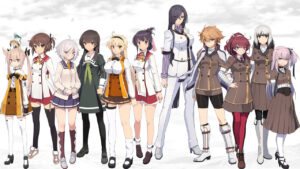 We have, for your perusal, another in the long and grand tradition of “Girls Who Save the World” shows. On its face, this is no different. No, seriously, it is no different than “Symphogear” or “Yuuni Yuka” or “Battle Girl High School”. Gee, even “Panty and Stocking” could fall into this category. Anyway, “Toji No Miko” (“Katana Maidens” or “Sword-wielding Shrine Maidens”) actually tells two parts of the same story, neatly divided at episode 12/13 (there is a recap episode at 12.5, which might make for a good lead in for the seconds part. I usually don’t do recap shows). But we will get to that break point later. Let us take up the sword, so to speak, and relate our tale.

We are centered about a group of our sword-wielding shrine maidens, “Toji”. They serve as a unit in the police force in order to exorcise mysterious, hostile creatures known only as “aradama”. The government has set up five schools throughout the country for these girls to attend. Yup, it HAS to be girls, as guys apparently lack something critical that would allow them to do battle against these evil entities. Or maybe lack TWO things….

The girls live ordinary school lives, while occasionally performing their duties, wielding their swords and using various powers to fight and protect the people. Because, you know, flower arranging class can get a bit boring and this school doesn’t have a tank club. Once a year, the five schools send their best Toji to compete in a tournament to see who the ultimate best is.

We get to the finals, between Kanami Eto of Minoseki Academy (second from left) and Hiyori Jujo of the Heijou Institute (her of the green dress, two to Kanami’s left). Both are very dedicated and determined fighters, even though they are 13 or 14 years old. However, Hiyori eschews the final battle and, instead, tries to assassinate the head of the most powerful toji family, Yukari Origami (that really tall number). Hiyori fails in her goal, but is protected by Kanami and both must flee the tournament.

They are now Enemies of the State and the rest of the girls spend their time trying to hunt them down. Hiyori explains her reason for the attack and things are not what they seem. Thus, we have our multi-layered conflict as events unfold and develop, involving different factions of Toji and aradama and how loyalties and trust are tested time and again.

So, the first half of the show is the attempts of our two maidens to get to the truth in all that is being done. The second half is the fallout that occurs as a result of the climax of episode 12 and how events eventually loop back around, precipitating another climatic battle. We also learn how Hiyori and Kanami are connected though a cataclysmic event referred to as the Sagami Bay Disaster, as many died in the conflict and how the current crop of maidens are still cleaning up the mess from that.

The characters are interesting to watch, as they have strong personalities and do not merge into a pudding of sameness (“I like the one with the green ribbon!”) that can befall these shows. It was the endlessness of the ultimate goals and how the implacable foe cannot be brought to heel, as brave maiden after brave maiden fall to her. Well, you know how these shows eventually end up and this does not fail to deliver in that aspect.

So, if all you seek are the flirty girls in the flirty outfits and we all sip some oolong tea at the end of a busy and hectic day, this show is for you. If you wanted something more, this may fall short for you.

Binging, binging, binging? Mixed bag. On the one hand, it does help the story play out a bit better, since they are on the run. On the other hand, the sameness of the fights tend to wear on one and they are a factor in the shows. I suggest that you chain four shows together. If you can tolerate it, go all out. If you want to retrench, you can.

And remember, it’s first run until you’ve seen it. Come at me.