Short-Pull Series XXIX – The “Ruby” of the Heart

December 2nd, 2021 in Anime, General Reviews by The Droid 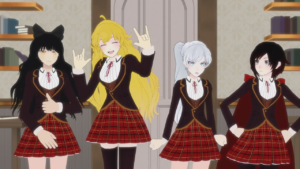 I enjoy Free Comic Book Day. I live close to one of the last remaining comic book stores in the US, and it is a big, big event. It also gives me a chance to check out the latest in comics. I remember when they were 12 cents an issue, so you know how old I am. One of the free issues they had contained a chapter from the manga for “My Hero Academia”. Well, I could not tell where it was in the whole story line, so it was a bit of a bust. It also had a chapter from “RWBY”. Well, that was a bust as well. This chapter was so deep into the narrative, they were a well-oiled machine at that point, so I hadn’t a clue as to who’s who.

Now, I had a chance to see some episodes of the show at an anime convention, but something else crossed over it, so it was missed. I knew I could find the anime on line and did so. Five full seasons of “RWBY” (at the time I watched). I will get to why it is called that in a bit, but first the show….

Welcome to the world of Remnant. There are four major continents, home to four kingdoms. Vale (where most of the show takes place) and Vacuo are on Sanus. Mistral is on Anima and Atlas is on Solitas. This is important, as our merry band will soon be traveling to them all. We begin with Ruby Rose (far right). She is walking down your street, with a love that she can’t hide, when she encounters the villain Alex the Droog…..I mean Roman Torchwick (sorry, it’s just when you see him, well, I was reminded of him). He is busy stealing dust and has his plans broken up, as Ruby wields a scythe/sniper rifle as a weapon.

Her prowess catches the eye of Glynda Goodwitch (just ignore it, OK?), an instructor at Beacon Academy, where students go to learn to be Hunters and Huntresses. You see, this land is overrun by Grimm, hideous, destructive beasts that need to be destroyed. Ruby, a mere 15 and attending Signal Academy, (Signal? Beacon? Signal Beacon! Hmmmmm…..) is upgraded to the more intense locale, where she joins her 2-years-older half-sister, Yang Xiao Long (blondie) in attendance.

Well, first days never go well and she has a run-in (literal and actual) with Weiss Schnee (Madame Grumpy with the silver hair). Her family makes the dust that enhances the weaponry that allows one to destroy Grimm. She also meets the mysterious Blake Belladonna (far left; we’ll discuss the hair bow later).  They are tasked with retrieving a relic, deep in the nearby forest. After some adventures, they select the relics at the temple in the center of all of this. Depending on what you selected, that is your ‘team’.

The team derives its name from the first letter of your first name, and the lead letter is the leader. So we get R(uby), W(eiss), B(lake) and Y(ang). Please ignore the other thought that it also can be seen as Red (Ruby’s ‘color’), White, Black and Yellow. So, the first season contends itself with introducing the capacious cast and all the trials and tribulations they are put through, as well as preparing for the Vytal Festival Tournament.

This is a very heavy CG show and it has the problems associated with it, especially with ‘float walking’. They do not stride as more glide and hover to get from one point to the next. We also fall into tropes with the characters, as they become iconic. For example, Jaune Arc is the lovable doofus, full of zeal, but not the deal. Your punching bag, as it were. We also have the school bully, the flirt, the hyperactive, etc., etc., etc.

You can blitz through the first season in a day as no episode reaches Industry Standard (I call it about 24 minutes). This also includes the ‘Color Trailers’. This is a way of introducing us to this odd and perplexing world, as well as the maidens we will encounter, so there are the Red, White, Black and Yellow intros of each of them. That way, when you drop into the series, it’s not that big of a puzzlement and you get a nicer degree of back story.

As interesting as the stories are (despite some obvious set-ups) I have to mention the soundtrack, which is compelling. There is not only some good music for the show and the intro/outro, it is executed quite strongly. I don’t know if you’ll be humming any of it while you feed the cat or shingle the roof, but you won’t pot down the sound or leap over the start of the show. Oh, the hair bow for Blake. Let’s merely say that it is an indication to her true nature and let you discover that on your own, but it becomes a plot point.

This is a series worth your time. I actually ran through all five seasons rather quickly, but am giving a one-by-one review, as each season is dramatically different from the other, as new situations and problems and inevitabilities present themselves. If you are able to wrap your head around the CG (it was a workout for me), it should go well for you. And it is nice to have the episodes be as long as they need to, with nary a filler or padding. And, yes, I did do a real binge, watching it all on one day (with bathroom breaks) and not only can it stand up to it, it really needs that hard push to really tell the story. This, in my opinion, is the Poster Child for binging.

And remember, it’s first run until you’ve seen it. I will be a Huntress!