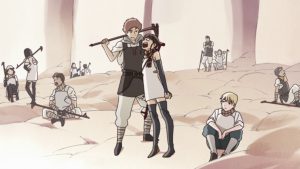 I once mentioned (and frequently do so) that you can find an anime on almost any topic. This one is really strange, “The Dragon Dentist“ (“Ryū no Haisha”). It takes place in an alternate universe, a time when dragons existed and did take to the skies.

Although no year is mentioned, it feels like the time prior to, and potentially including, World War Two. Dragons roam the skies, but are in need of a symbiotic relationship. Humans live on these massive beasts (maybe the size of an aircraft carrier, or a small town or even all of Vatican City) and their duty is to clean the dragon’s teeth.

The dragons have voracious appetites and are non-discriminatory in what they consume. This means any and all kinds of nasty creature lives around the gums and between the teeth themselves. And we are talking teeth, practically endless rows of them. Since it is hard to get the dragon to make an appointment and then get them into the chair (“Those back molars have got to come out!”), you have to go to the dragon.

Into this mix is flung Bell (Belinard Octavius; that’s him sitting down to the near right). He was a soldier in the army and was caught up in a pitched battle. Gulped up by the dragon, he should be dead, but was resurrected to help the dragon. With Nonoko Kishii (the angry miss) as a guide, he learns what it takes to be a dragon dentist and keep said beast happy.

But into this mouth of pearly whites creeps a vicious cavity. Some land folks want the dragons brought down. Some of the tooth cleaners want an end to this life as well and return to the surface. This two-part show gives us the details on how Bell learns what he must do with his new life and fight against the forces that wish to bring this to an end.

There are also a ton of rules to be aware of, as the slightest misstep can cause your demise. But you are doomed anyway, owing to the nature of your existence, or revival, however you wish to address this. You serve the dragon, no questions asked, got it?

It is a fanciful series, although the second half got bizarre with the appearance of the villain. The fight sequences are marvelous to behold and even something as ‘mundane’ as cleaning teeth turns into a real adventure. The infestations are along a caliber that you might see in a Studio Ghibli offering and how they are disposed of is equally interesting. Those things in the background are part of the dragon’s teeth, so you can see the daunting task before them.

I don’t know if this is a short run show or a movie (as it does clock in for the two parts at 92 minutes. Good movie length, but it’s not presented as such), but I found it oddly compelling, even with some obvious hints dropped. Despite all that, I stayed with it. This has flown below the radar and hasn’t gotten the viewings it deserves. I say check it out.

And remember, it’s first run until you’ve seen it. Is he alive?