The Vine Her Ancient “Ruby” Yields

December 16th, 2021 in Anime, General Reviews by The Droid 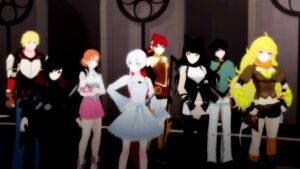 So, now that we got all the basics settled and problems presented in Season 1, we move on to Season 2 of “RWBY”, where things get more complicated.

The Vytal Tournament is taking place. Since this involves all the schools from all over, there is now an armed presence from Atlas Academy, which makes an already tense situation worse. If that wasn’t enough, White Fang, the militant group comprised of Faunus races, is making things tough, as they slowly try and exterminate those who stand in their way, friend or foe. Roman Torchwick steps up his thefts of dust (remember, this enhances the Hunter’s and Huntress’s abilities to use their weapons) and a new element enters to create havoc and more havoc.

If this wasn’t enough, we see all the students put through their paces in order to BECOME Hunters and Huntresses, learning about the multiplicity of Grimm out there. The season concludes with a massive fight between the students and the Grimm.

One of the bigger problems with the show is that everyone is becoming their own stereotype. They represent something but I am not seeing any real character growth, even when Blake is confronted with her past. And if that wasn’t bad enough, the teachers and the villains also fall into tropes. Roman Torchwick is just your typical bad guy, doing typical bad guy things and having to answer to a more villainous boss who is ALSO doing typical bad guy things. At the very least, there is a vibrancy to what they do. Nothing is half-hearted in anything of the tasks they undertake.

Blake has come to terms with her past, Weiss has to deal with a rather over-bearing sister and Ruby is trying to live up to the standard that her sister is setting. Oh, yeah, everyone else is chasing something else, but it is a rather full course on this, so it plays out a lot better than me telling you the wheres and the whats as to their personal goals and dreams. I just wish Jaune was less of an L-7 in all of this, but you need comic relief where you can find it, I guess.

Although the episodes are longer, it can, needs and must be binged, as it will not take up that much time, but helps with the overall feel of things. It almost feels like it plays out in real time, so it feels less episodic or lurching from point to point.

And remember, it’s first run until you’ve seen it. Are you ready for this?