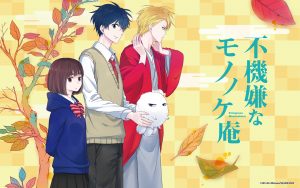 I have to assume that anything related to dealing with the spirit or yokai realm is a huge amount of hassle. I guess they are rather unpredictable and since many of them are scary/ugly/hideous (to our scale of thinking) most folks shy away from it or have zero idea as to what is really happening (like being in Washington D.C.). The story we have here, “The Morose Mononokean” (“Fukigen na Mononokean”) elaborates on this theory.

Hanae Ashiya (that collegiate-looking guy in the middle) is starting out in a new school, but is beset by some mysterious illness that saps his strength. At first, he thinks is a cold or the flu or some other disgusting disease, but he can’t shake it. He then sees this fuzzy creature on his shoulder, but can’t get rid of it. Not willing to be bested, he finally drags himself to school…..where he ends up in the nurse’s office after collapsing in class.

Once there, we discover that the room is a dimensional portal, which can bend the rules of space and physics, much like a magician. Ashiya balks at the job, but asks that the yokai be removed. Abeno does so, to reveal the truth behind the creature known as Fuzzball (that hairy volleyball Ashiya is holding). Normal protocol is to send it back to the spirit realm, but we learn of Fuzzball’s needs and he is allowed to remain.

However, there is the subject of payment. You can’t get something for nothing and the amount of the bill is staggering (not like $$60,000,000,000, but it’s pretty bad) and needs to be paid in Underworld currency

In order to work it off, Ashiya has to be the assistant to Abeno, who is the current mononokean. OK, let’s clear up some things. The mononokean is a classic square tea room; it has four long tatami mats aligned so that they surround the ro. This is where Abeno usually is, but the mononokean is a yōkai and it expresses itself through a scroll hanging on one wall. So I got confused, as the scroll is very happy, but Abeno is, well, morose.

Anyway, since Ashiya has an ability to see yokai, they form a caliber of working relationship. It’s an anime “Odd Couple”, but without them having to actually live together. They still go out and do good deeds, like sending yokai back to the Underworld. So, they are not fully exorcised and sent into the æther, but guided to a city where they will not be feared and actually rub shoulders or elbows, or whatever they have, with other yokai. So, the series is putting them two guys through their paces as they do their job while Ashiya tries to pay off his massive debt.

The girl up there is Zenko Fujiwara. She calls upon their assistance when her father, who runs a temple, becomes cursed and she becomes a kind of auxiliary help with their yokai hunting.

The only sour note comes near the end, when Ashiya does something that will affect his relationship with Abeno. Can’t reveal it, as it is a plot point, but I kinda felt it was a paste-on problem: it wasn’t that serious, but we couldn’t merely have the Exorcism of the Week approach to this show. I also wish I saw more of Abeno’s softening of things. He did come off as a bit of a cranky old man, but we never really discovered or understood why he is the way he is. Like yokai, it is just another mystery of nature.