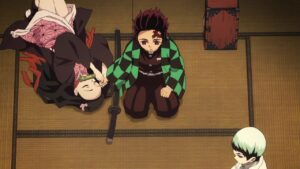 OK, we have been busily killing goblins, now it is time to take on demons. But these demons are of a harder, more pernicious nature and even the best of your skills may still come up short. I mean, you have morality; they have sharp claws. See where that gets you. But this is the driving force behind Demon Slayer: Kimetsu no Yaiba (“Kimetsu no Yaiba”, or “Demon-Slaying Blade”).

We are in the mountains of Japan. Tanjiro Kamado (guy with the sword) lives with his family. He makes a living selling charcoal, but that means he is away from home a great deal of the time. After a great day in the village, he gets on the road home late, and is taken in by a man as night fully falls, as you do not want to be out at night in the mountains. Man-eating demons roam about and they don’t take ‘no’ for an answer. He gets home the next morning to find his entire family has been slain by demons, and his sister, Nezuko (her beside him) has become a demon.

A demon slayer comes by and says the best thing for Nezuko is for her to die, as she is a demon and will try to kill Tanjiro. Is there a way to change her back to a human? There are rumors, but it is impossible to prove. It’s better if she dies. However, both of them are saved and are told to see Sakonji Urokodaki, at the foot of Mt. Sagiri, as he will train Tanjiro in the quest that lies ahead of them. Although, it would be better if she dies. This is their story.

Well, it’s actually two stories. This is a 26-episode run and there is a solid and firm demarcation line. For the first twelve, it’s Tanjiro doing what he can for Nezuko and the demons that he comes to slay, as well as the people who try to render help. The next twelve introduce two new character who are now along for the ride. You see them in the credits, but they come on board later on.

The first is Zenitsu Agatsuma. In short, he is a coward. He is in stark raving panic about everything, especially that he might get killed by a demon. Well, don’t join the Demon Corps, as you are going to be asked to kakk a few of them and they may return the favor. The thing is, he cries. I mean, he CRIES! Huge tears and rivers of snot running from his nose and a panic attack that could stop all of Guatamala. Every. Single. Episode.

They have more patience than I; I would have lopped off his head just to stop this nonsense. And as to nonsense, the other character ain’t much better. Inosuke Hashibira is one seriously buff dude. I mean, even his six-packs have six-packs. He wears a boar’s head mask, is stripped to the waist all the time and wields double katanas with a wicked serration on the top. He is one committed dude and a tough customer to deal with.

The key arc of the second half is a fight on Mount Natagumo, with demons that are the hardest and the roughest they have ever met. It takes all that they have to go up against them. A very balanced and interesting approach to all of this fighting, it works best to let it unfold for you, rather than have me jabber on and give away the ending (“Rosebud is the sled!”)

The only drag point is the key Demon Slayer Corps, the Hashiras. At the end of the day, they are egotistical preening prats, who feel that they are far, far, far, far better than anyone else, answer to no one and are free to do as they wish. You know…..morons. Oh, and it would be better if his sister dies.

And they are not even aware as to how anti-social they are. Tanjiro and crew get another round of training as they heal from the mountain escapade, so Tanjiro can hunt down Muzan Kibutsuji, who is potentially the Head Demon. His demise could lift a vile and terrible curse that infests this land. Oh, that’s right.

I had a hard problem with time setting. For the most part, you would think it was the late 1700s or early 1800s, with how people are dressed and acts and roam the countryside. However, when we have our fleeting encounter with Kibutsuji, it feels like the 1920s! There’s electricity and cars and somewhat modern dress! But do not let this little quirk distract you from an engrossing and horrific series, as these are demons with a purpose and are just as committed to their survival as others are committed to their destruction.

You could try to binge it, but the fight scenes get rather intense and you may not hold up well enough under that barrage. But however you want to see it, see it.

And remember, it’s first run until you’ve seen it. I will make you human!