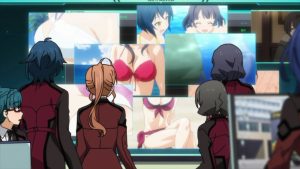 I am always concerned about the second season of any show. Sometimes, there is a tendency to stay the course. Maybe good, maybe not. Other times, you want to strike out in another direction and try to accomplish more than you did in the first season. Always daring, but not without its pitfalls. Sometimes you abandon that which you had and made it appear like it was two different shows. That is what happened with “Active Raid 2nd”  (“Akutivu Reido Sekando”). Whatever happened in the first show, it got turned into a political drama (of sorts) in the second show, which is a shame, as I felt a lot of good characters were misused or underused.

The first season dealt with Unit 8 and their nasty tendency to destroy things in trying to save the population from the abuses of Willwear users (think of that as your own personal Iron Man suit). In fact, the second season started off as a continuation of the first, as there were still a lot of unregistered and unlicensed Willwear folks whom seem to have better suits than the constabulary. Then, we get to the above episode, when one of the users was using his suit and small drones to take rather risqué snaps of ladies in all caliber of undress. Is this what they are fighting, a new age of peeping Toms?

Well, as in the case of series like this, the ‘real’ story eventually shows up and it revolves around Logos and Governor Kotaro Inagi. Logos wants to bring the nation to its knees and only Inagi can rescue everyone. Or it is all political theater? It’s just that there are distractions after distractions and the real truth about what is really going on is painfully hard to uncover and then painfully hard to digest. It’s just when it was a show about how the folks of Unit 8 (and later Unit 9) seemed unable to do their jobs without wholesale destruction, it was a better show.

Everyone is trying so hard not to mess it up, they mess things up even more and even worse. When the political machinations reared its ugly head, lots of that goofy charm faded away and it turned into another pot-boiler. The only character of any real interest is Abigail Martinez, the chief of mechanics of a new garbage collecting company. She has a pair of lungs on her in both senses of the word. She is really out there and when she opens her mouth to speak, a longshoreman would blush at her commentary.

Other than that, the show just didn’t know what it wanted to do with itself and ended up accomplishing little in the overall scheme of things. It’s like New Coke: why tinker with a formula that works to end up with a product that everyone detests?

And remember, it’s first run until you’ve seen it. I believed in you!