February 17th, 2022 in Anime, General Reviews by The Droid 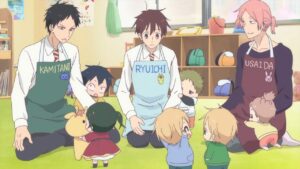 This is a rather odd series, in that it tackles a subject that is not usually found in anime or manga. This is the world of “Gakuen Bebīshittāzu” (also seen as “Gakuen Babysitters” or “School Babysitters”), a dramedy that starts off really sad.

We have two young brothers, Ryūichi Kashima (a freshman in high school, you can find him easily) and his younger brother Kotarō (a preschooler; he’s hiding behind Ryuichi). One day, their parents up and die (which happens quite a lot in anime) and they are left orphaned. They have no place to call home and, apparently, no one willing to take them in.

They are contemplating life on the streets when the chairwoman of the prestigious Morinomiya Academy offers to take the boys into her care. She will give them a new place to live and free tuition. Wowie Zowie! Oh, there is a proviso: Ryuichi helps out with the school’s daycare center, while also attending normal classes during school hours. Uh…….OK.

The daycare consists of five other children and two adults.

Let’s start with the Kamitani siblings. In a set-up similar to Ryuichi, we have Hayato (in his apron) and Taka (behind him). Taka is more boisterous and forthcoming, to the point where older brother has to conk him on the head a lot to get him back in line.

Kirin Kumatsuka (red dress), she is both the oldest in there and a ton smarter than the rest of them. Do NOT take away her giraffe plushie, OK?

Then, there are the twins, Tamuka (in blue) and Kazuma (in green). Blue is brave and adventurous, Green is timid and uncertain and cries at the drop of a hat. But they are very close for brothers.

Lastly, Midori Sawatori, the youngest who ends up being carried by Yoshihito Usaida, who is a bit on the ‘leisurely’ side.

We should talk about Yōko Morinomiya, the chairwoman of this place. She is short and wizened, but sports an absolutely enormous afro, which merely adds to her terrifying persona. A strict, no-nonsense person, she is really there to offer guidance and structure, so everyone stays on track. The series looks at about a year with these people.

The lion’s share of the show is the relationship between Ryuichi and Kotaro. Despite the huge age gap (10 years? 12 years? It’s pretty big), Ryuichi worries about the day when Kotaro grows up and no longer needs him and how Ryuichi strives to be mother, father, brother and mentor to his younger brother. Also, the wild and crazy hijinks that goes on in the day care. I mean, you have six kids, three of which are real pistols, and trying to channel all that energy is a real challenge.

Although I would not call this a soft series (we are reminded a lot about the parental demise), it is more a series of tiny events that add up to a greater whole, as Ryuichi comes to terms with the inevitability of life and that you need to cherish and enjoy what every day brings. It’s not always sunshine; it’s not always rain.

The Binge is tough, as you want to let the more emotional and subtle aspects sink in, and you may discover a caliber of sameness, although it really isn’t the same every day. I chose not to, but you could, if it holds up for you.

And remember, it’s first run until you’ve seen it. CONK!