September 30th, 2021 in Anime, General Reviews by The Droid 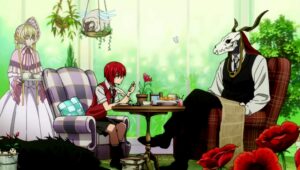 I was greatly relieved when the series, “The Ancient Magus’ Bride” (“Mahō Tsukai no Yome”), came to fruition and actually explained the proper position of the apostrophe.

The series starts off with orphaned high school student Chise Hatori (center). She decides to sell herself at an auction in order for somebody else to take her in and give a new place to call home. At the auction in London, she is eventually acquired for five million pounds by Elias Ainsworth (far right). This magus sees within her the power and the force necessary for both of them to grow. But this will come at a very steep price, perhaps higher than either one of them can pay, financially or spiritually. The series details all the trials and tribulations that they both experience and endure to become more than what they are now.

I realize that is as thin a description as one can give, but the glories of the show is how things unfold, revealing to Chise the magical realm that is all about one, but is not perceived by normal folks. We also learn about Elias and what he was like as a youth and what he went through. He still sometimes steps in it, as his interpersonal skills (Intermonster skills? Intercreature skills? Well, whatever you call ‘em, he ain’t got ‘em.) are both lacking and in short supply to begin with.

One heartbreaking aspect in all of this is that everyone Chise meets knows that she will die young. The abilities she has exact an enormous toll on all aspects of her and she may never actually become Elias’ bride. But this is all kept from her. If anyone is to break the news to her, it must be Elias. One marvelous aspect of the show is the scenery. It is lush and gorgeous and even when it is covered with snow, there is still a magnetism to it all. And the characters are well defined, even the villains. They are that smooth, sophisticated villain who has no qualms to use and abuse one person to get to another. This makes them far more dangerous than some of the cartoon villains that I see.

You should let this unfold slowly. Even my standard approach of two episodes together was a bit much, as I missed a lot of subtlety that the show offers. Yes, the action sequences are packed, but the emotional sequences are far denser than one would imagine. Although I think they missed one point that should have been explained, unless they felt we would understand, and that is the auction.

Before Elias comes in, the bidding is rather modest. Then, Elias drops that Big Wad, which shocks everyone. This was done not merely to secure Chise, but to let her know that she has a true and genuine value and that she was well worth that enormous sum bestowed upon her. But no one said anything more about it and I felt that was a missed opportunity. In any case, get thee to this show.

Although the show plays out over several months, you can go binge this, as a lot of the emotionality and concern work far better and we can see the pressures and forces at work on this young lass, who has no real idea as to what it going on to her in her fragile life. Perhaps you might address the odd idea of doing the binge and then watching it again, more slowly.

And remember, it’s first run until you’ve seen it. You will be my bride.