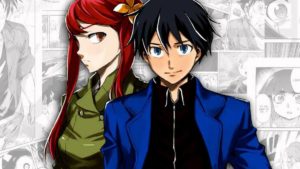 This show is presented as an OVA, but it comes off more as a one-shot, and a confusing one at that. “Big Order” (“Biggu Ōdā”) tells the story of Hoshimiya Eiji, but it is done in the most painful way possible as to make it nearly incomprehensible as to what is going on. He starts off talking about wishes and if you were given one wish, what would it be? He progresses through his normal, boring life in his normal, boring town, going to his normal, boring school and seeing the new transfer student (that’s her up there, Kurenai Rin).

Oddly enough, they are in the same apartment complex and she has broken off the key in her lock. Having no cell phone, she needs some help in getting a locksmith. This is where it gets odd, as he goes through a series of various realities, with a series of different people in different locations at different times. He may be having sex with Rin; Rin may have sliced off his hand with a katana; his world is not a tidy city but a bombed-out disaster area with zombies afoot; things are in total chaos; the Cubs have won the World Series. You know, weird things like that.

He has friends who love and care for him; he has enemies who want him dead, dead, dead! What did he do? It comes down to one line, which I cannot say, as it (might) explain the whole situation, but is the key to the show and you deserve to discover it for yourself.

As a one-shot or stand-alone, it is an execrable mess, as the time and space jumping do little to explain things. There are tales afoot that this is actually Episode #0 and that a real series is coming our way. Now, this was done by the same folks that gave us “Future Diary” and we honestly have the same two characters: a rather clueless guy and a very homicidal gal. It’s just that, as an experiment or a test run it fails, especially since it ENDS! I mean, we get to the 22:50 mark and it drops dead. Is he doomed to Groundhog Day the rest of his life? Does he remember nothing? (He falls for the same stupid trick twice, oblivious to what went wrong the first time it came around). Is there nothing he can do?

I am going to tell you to wait and see what happens. There is nothing to indicate that this is a ‘must-see’ and your time is better spent with things that make a whole lot more sense, like US Tax laws or hockey blue-line rules. Or we’ll just reset and try again.

And remember, it’s first run until you’ve seen it. What would you wish for?