Attack of the OVA XII – It Ain’t Easy Being Green

August 2nd, 2018 in Anime, General Reviews by The Droid 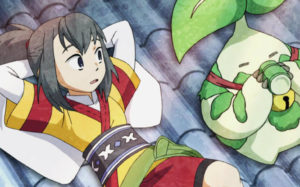 In an earlier review, I noted that I have to look out for trends and I think I am seeing another one, that which I will call “Episode #0”. I have a problem with offerings that are billed as an OVA. You need a series tethered to it to be an OVA; otherwise it’s a one-shot. Also, don’t bill it as a ‘movie’ when it’s about one episode time in length. But with the turn-around on “Big Order”, I came to understand that it may be a test run, to see how things are going to decide if you want a real series to go with it.

“Coluboccoro” brings a lot to the table, but leaves a lot behind, implying that there may be a series to follow, depending on how this one-shot goes. We are in a magical realm, where magic is real. Suzu is a student who has to climb this, well, uh…. it looks like a beanstalk, OK? She is the 14-year-old heroine, whose shaman father saved the world from catastrophe in the past. She wants to follow in those footsteps but lacks the patience to both learn and to wait.

But she ventures into these Forbidden Grounds to find a seed. Well, it looks more like a submarine mine, with all the knobby projections. But a seed is a seed and she plants and waters it, only to have come out this…..creature. This is Coluboccoro, the spirit of nature. The plan she has is fairly simple: to regain peace and nature to the ruined villages, help them to pick up the pieces of their previous lives and return to a safe life in balance with nature

Yeah, OK, it is a bit eco-conscious and equally thin. It comes off more as a test balloon, to see if there is enough interest in things to sign on to a full series, thus MY designation as “Episode #0”. Now, as far as that part of the game goes, it is an excellent origin show, allowing us to see the major players and understanding where we go from here. But that’s the rub: where DO we go from here? Is it going to be the ecological Disaster of the Week? Does she have some kind of plan in place to make her grand dream come true? There has to be a villain, as things never run as smooth as you would like them to be, so what can we expect from this villain? Who is this villain? Did someone call “Rent-A-Villain” on this?

As it stands, it is a mere blip on the horizon. I would put this on your ‘Later List’ and see if more comes around. There is nothing in this show, as it stands, that demands you see this right away.

And remember, it’s first run until you’ve seen it. You went up there again.