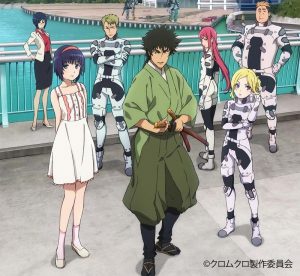 The past is the future is the present. That’s not an ‘alternate fact’; the rather cryptic line is the best way to describe “Kuromukuro” (“Black Relic”), this iteration mecha show. Yes, as a lot of folks know, mecha is my most detested anime genre, beating out sports and vampires. I once mentioned that if there was an anime about sports-playing vampire Gundams, voiced by Chris Ayres, then it’s everything I hate all in one spot. But this one tried to do something more with the genre, and for that it deserves a bit more credit.

It is actually the slight future (like 2030 or so. Still no hoverboards). We are at the Lurobe Dam, a magnificent structure of mechanical engineering and graceful beauty. However, when it was being constructed sixty years earlier, some odd items were discovered, referred to as “Black Relics”. They include a mecha, some large cube and a series of unnaturally-shaped stones.

They have been examined and irradiated and examined and carbon-dated and examined and licked and examined (well, you know those archaeological types; they are weird birds), but to no avail. It is more puzzling than hockey Blue Line rules. Now, there is a UN force at the dam. I assume it has some caliber of importance that it must be protected, but from whom? Camera-wielding tourists? Never mind.

Hiromi Shirahane (that professional woman in the back to the left) is leading the current research on these items. Her daughter, Yukina (front and left), accidentally triggers a cube component of the Kuromukuro (the mecha), releasing Kennosuke (samurai guy) from cryostasis. Well, all hell breaks loose as Ken (as he is later referred to) is naked, naked, naked. (Clothes can’t travel but skin does? Never mind.)

After being subdued, we learn the story about him and his mecha: some 450 years ago, an extraterrestrial force called Efy Dolgh (or Efydolgh) invaded Earth. The people of the Sengoku era called the enemy machines and drones as ‘Oni’. The Washiba Clan fall victim to them, but clan heir Yukihime and her samurai retainer Kennosuke Tokisada Ouma (samurai guy’s full name) fight back with a stolen mecha, which they name the “Black Relic” (Kuromukuro). They succeed in vanquishing their foes, but when the Black Relic is caught in an enemy explosion, Yukihime disappears.

Now, if this wasn’t enough, the Efydolgh come back, looking for their stuff. You know what that’s like: you go to a hotel and discover you left something of yours behind, but not until you are like 450 miles away and you have to go back for it, right? Well, they want to finish what they started, so they send down their drones (given some absurd names like ‘Cactus’) to do battle, but unaware of the presence of Kuromukuro.

Here’s the real trick with the mecha and that is it needs two pilots. And wouldn’t you know it? Yukina fills that role quite well. Except she doesn’t want that role. This is more than she can handle and she is not all that reliable.

We have to depend on the other UN mecha force (that’s them, looking like Holstein cows) and you can just catch their mechas (GAUS) way in the back. But the Efydolgh forces are just a bit better, both in combat experience and machinery, so it ends up being a war of attrition. The series outlines the numerous fights that occur between everyone. I mean it. Everyone. We have:

My beef with mecha shows is that it all appears to be endless fighting and this one, on that level, is no different. The bad guys dispatch people in that ‘next in line’ mode, rather than sending down overwhelming numbers to crush all resistance, so they get mad that things aren’t going well and end up being surprised when these Earth people manage to gain the upper hand at times.

It’s just I wasn’t certain what was the story they wanted to tell. Are we going to see Ken mainstreamed into a society that is completely alien to him? Will Yukina accept her fate and get into the co-pilot seat? Is the UN going to do much more than run around and get flattened by every foe they encounter?

To add to all of this, there are a couple of late-inning revelations that alter the color and character of the show. It’s not a deal breaker, but it felt like it complicated already complicated problems that weren’t all that complicated to begin with, just to inject in a tad more tension and uncertainty.

Now, if you enjoy mecha but want to be freed from the Gundam nexus, this is a good choice for you. They try to balance the GFR portions of it with the ‘stranger in a strange land’ approach as Ken acclimates, but none too smoothly. It doesn’t always succeed (the UN pilots are a caliber of butt head), but they are trying for something new in a rather overworked genre.

And remember, it’s first run until you’ve seen it. I am a samurai.