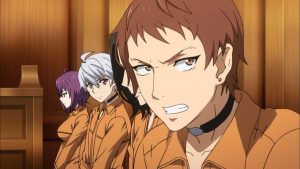 Well, this certainly is a different approach to the horror genre. It’s potentially just as bloody as “Terra Formars” or “Blue Gender”, but it moves it in another direction, so it’s not as cut and dried as you may think, which kinds of frees it up from the standard conventions that bedevil horror shows.

OK, it is 2076 or thereabouts. Still no hoverboards. Some sixty years earlier (our days, OK?), there was an odd epidemic of sorts. Many people suffered from a strange case of insomnia that struck the population. Unable to sleep for more than a week, numerous people became completely sleep deprived and eventually went mad with rage. A new medicine was produced to cure the illness but it had a terrible side effect. Far worse than constipation or diarrhea at the same time, it turned some people into vampires, who are called “Bloodivores” (although the original idea for this story comes from a manga called “Time Prisoners”).

They are feared by other people and these affected folks must wear a special necklace that sends a signal to the police if a Bloodivore is unable to control their emotions. Try as they might, it is not uncommon for them to go off the deep end and attack people. Vampires, right, so there are fatal attacks and the only way the police deal with them is to kill the Bloodivore. Into this mess we have our four Bloodivores. Yes, it was hard to find a clear shot of all four of them. Right to left:

Now, Mi Liu was born from a human and a vampire and was christened the “Child of Hope”, to show that Bloodivores and Humans can peacefully co-exist. Well, that didn’t work out and his gang robs a bank. Not successfully, either. However, they are railroaded into the death penalty at their trial when it is claimed they killed people.

No, they didn’t, but that is needed for our tale to proceed. They are sent to this odd location, which looks like a gigantic warehouse, along with a hundred other Bloodivores. This is done under the auspices of the National Defense Agency, the group tasked with keeping these types in check.

A strange girl comes out of nowhere to explain things. The collars on their neck are rigged to explode if they try to take them off. If they can survive, they win. Then some horrible, hideous monsters appear and begin the slaughter. The series involves what steps all these people take to not only survive but neutralize the threat that is out to kill them.

Well, the entire series can’t be merely evading, eluding and eliminating, so there is a lot of back story on things and some strange people who come out of the woodwork to spout their particular tales of wants and needs. It’s not really a really horror story, although, at their core, all horror stories are about ultimate survival. It’s just that the whole reason behind it was never honestly revealed and if these folks manage to survive that which is before them, won’t they come back to society even more filled with vengeance and outrage, thus creating even more problems?

We could have really examined society’s honest handling of the situation. I didn’t ask to stay awake for a week and I certainly did not want to become a Bloodivore, but there you have it. Yet, society treats me with scorn and contempt and can’t wait to put a bullet into the back of my head if I even look at someone oddly. But we didn’t do that. Yes, some of these Bloodivores are truly criminal and deserve what they get, but there has to be a better approach than farming them out to slaughter.

Sometimes, I feel that horror shows are done just so you can see globs and globs of blood (like ‘Strait Jacket’, but more on that later) and we allow things like ‘plot’ and ‘story line’ to remain on the shelf. This is a show that comes off very well, if you ignore the glaring flaws within it. So, if you desire a dinner of carnage, this one is multi-course. Just don’t expect it to hang around too long.

And remember, it’s first run until you’ve seen it. We’ll survive together.

One response to ““Blood” on Your Hands”