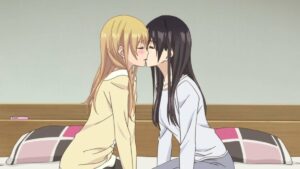 Yeah, these reviews are a one-two punch, as I found myself in the world of yaoi and yuri. The thing is I have a hard time determining if it is yaoi from the outset, as it can be couched just enough. Yuri, however, if pretty blatant, even if I don’t see two girls kissing, like above. Part of it is in the title, as a lot of yuri love shows seem to hover around fruit of flowers, whether it’s “Strawberry Panic” or “Sweet Blue Flowers” or, in this case, “Citrus”.

It starts off as any typical blended family drama. Yuzu Aihara (blondie) has a mom, Ume, who’s a widow and they have been forging ahead on their own. Suddenly, out of the blue, she ups and marries a man, who is a widower and who has Mai (brunette.) Well, neither one of them is happy about the arrangement, and when they find out they go to the same school, with Mai as the Student Council president (among other things), sparks fly. You see, everything that Brunette is, Blondie isn’t. Or viva voce (that’s a joke for like the two people who speak Latin.)

To make matters worse, they have to share a bed together. Really? I do not know how Japanese culture works, but I cannot imagine two high school girls sharing a bed together, considering how much they detest each other. The Big Deal comes when they have an argument and Mai, without warning, kisses Yuzu fully on the lips. Sure, this ends the argument, but it opens a ton of doors in other directions.

It’s just that Mai seems to pull the kissing trick all the time, and it is a great way to stop the argument, but, again, it opens up all those other doors that, maybe, shouldn’t be opened and it ultimately creates all kinds of troubles and problems that you could have avoided in the first place, if you had a better argument ender.

I never got into the show, but this is not a surprise. I just am not into yuri, no matter how you present it. Whether it is two young women, on the cusp of maturity, trying to understand such complex issues as love and intimacy or two hot sluts who need to get down and dirty, it’s still broccoli and I say the hell with it.

I never felt the confusion, the odd confluence of revulsion and appeal, the trying to get answers to how you feel without tipping too much of your hand, the what-comes-next in this relationship. Whether they did not know the words to say or couldn’t determine how to say the words they had or how to say them, it went nowhere for me. It might work better for you.

It is a nice-looking show, as a lot of thought went in to not only the character design, but overall layout, so things are cast in a pretty manner. However, it may be one of those genres that I will never fully grasp, so all of the cuteness washes over me.

As far as binging goes, I feel this can hold up to the rigors, as you see the relations unfolding far better than my hit-and-run approach, although you might come to dislike Mai for her manipulative ways and means. Still, if you are a yaoi lover, have at it. If not, you may want to hold off.