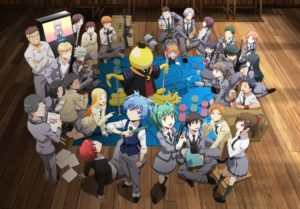 Well, we knew by the close of season one of “Ansatsu Kyōshitsu” (“Assassination Classroom”) that there was going to be a season two, where the stakes are much higher and the pressure to succeed is at an all-time high. Although this classroom of slackers and underachievers are well-versed in assassination techniques, they are no closer to getting rid of Koro Sensei (that yellow effigy in the middle) today than they were when he first made the scene months earlier. Adding to the problems is that the government feels events are not progressing at a proper enough clip, so ringers are called in to complete the deed STAT.

Well, the students are ticked off at this, as they have put in grueling hours and endless work towards this end and they are not going to let some interloper spirit away the 10 billion yen reward for his demise that they have labored towards. The drag in the second season is that we learn the back story regarding Koro and I felt it was a bit of a let-down as to where he came from and how he ended up here.

Now, the plans the students come up with get more and more elaborate and show some real problem-solving skills, but that also clashes with the preening prats at the regular school, who feel that they are vastly superior to those losers, so the elites are constantly sabotaging what the proles can do and can’t do. One concern I had was the loss of presence of the teachers Mr. Tadaomi Karasuma and Ms. Irina Jelavić (not seen in the above shot). They provided some critical support in the first season, but have been relegated to the background for this go-around.

The Big Drive (and we are COMPLETELY throwing out Episode 19, ludicrous, even by anime standards) covers the last five episodes of the season and builds to a stunning conclusion. The very last episode turns into a ‘then what happened’, but I can’t reveal too much. If you have invested the time into this show, you want to see how things work out and not have me go ‘Kevin Spacey is Kaiser Sose’ or something like that.

Although they did lose a bit of steam, it is a strong series to take in and with it being potentially concluded (never say ‘never’ in anime), you can easily shoot through the entire run. There are two OVAs. The first can be avoided, “Jump Super Anime Tour Special”, as it is a combining of episodes 7 and 8 from Season One. If you want to see a slightly alternative take on events, then watch it, but I would pass. The second OVA, “Meeting Time”, details how Koro and Karasuma first met and turns out to be a rather funny offering, despite being only 10 minutes long and could be complete horse feathers in regards to the ‘truth’.

And remember, it’s first run until you’ve seen it. The time has finally come.