Count to One “Hundred”

October 25th, 2018 in Anime, General Reviews by The Droid 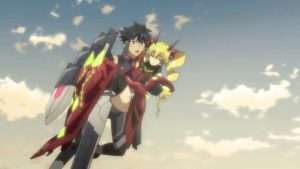 I guess this is the year of ‘save the world’. I have seen a ton of shows like this and “Hundred” (“Handoreddo”) is no different in almost any aspect of it.

An alien life form has come down to the Earth to wreak destruction. They are called ‘Savages’ (and about time we gave them a name befitting their foul and fetid nature. Don’t call them junk like ‘Battle Bugs’ or ‘Those Guys’). But only a certain caliber of person can hope to defeat them and these are our ‘Slayers’. They use a special crystal that unlocks their powers. Well, you can’t stick your hand in a box of Cracker Jacks and hope to get one. Nope, you have to go to a training academy.

This ‘hundred’ is the only weapon that can counter the mysterious Savage life form attacking Earth. To become a Slayer who wields this Hundred, Hayato Kisaragi successfully enrolls in the marine academy city ship Little Garden (and how big this aircraft carrier is, I can’t tell). However, he feels a strange yet familiar sense of incongruity towards Emile Crossford, his roommate who somehow knows him from somewhere. On top of that, as soon as he enters the school, he is challenged to a duel by the “Queen” and the school’s most powerful Slayer, Claire Harvey. Stop me if you have heard this before. A priest, a rabbi and a minister walk into a bar…..OK, how many people chose ‘the duel is ended before a winner is named’? Yeah, right.

Now, adding to this, Hayato is a ‘variant’, kind of like a Holo Pokemon card. He encountered a Savage a decade earlier (and somehow survived) and obtained a greatly increased affinity for Hundreds as a result. He has the highest known compatibility with a Hundred and his Hundred, the Flying Swallow, is a chevalier type that takes the form of a sword and a shoulder guard (which you can kind of see up there). The series contends itself with him learning how to fully use his powers, defending the Earth against the Savages and trying to have a real friendship with all of these other Hundred wielders.

Oh, yeah, and try to get the necessary medical treatments for his sister, of which The Little Garden is able to accommodate his wishes and desires. You will fight and possibly die, but she will live. Take it or leave it.

It’s just that with little changes and switch-ups, I am seeing this show again and again: “Sky Wizards Academy” earlier this year, “Ange Vierge” right now (a review might be coming out for that), “Masou Gakuen HxH” in the future (it’s on my to-do list). It’s that this follows the standard arc and, at the end of it, we have reached a point, but not a conclusion and that must await another day (or the next season), as we need to get stronger or work together better or spring for those upgrade in the suit (but it’s 50,000 gauld!) So, unless you want to see more flirty girls in more flirty outfits who fight to a stalemate, I would delay watching this show. There are better things on the horizon that deserve your attention.

And remember, it’s first run until you’ve seen it. Hundred on!