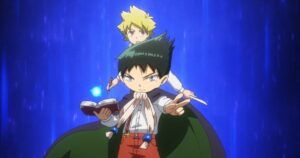 Yeah, this is a magical boy show. There are probably a lot of them out there, but this is more aligned with Harry Potter than Sailor Moon. And if we are doing the crossover, it would be a merging of Harry Potter and Perry Mason (OK, potentially closer to Judge Dredd, but without the Stallone Snarl and someone barking out “I AM the law!”) We are at “Muhyo & Roji’s Bureau of Supernatural Investigation” (“Muhyo to Rōjī no Mahōritsu Sōdan Jimusho”, also known as “Muhyo & Roji”).

Toru Muhyo (in your face) is one of the best practitioners of Magic Law, as well as being the youngest executor to ever graduate from Magic Law School. He is always right on the mark when it comes to citing the correct precedent to remove some perpetrator. He is emotionless to the point of being cold and stand-offish. Jiro Kusano, nicknamed Roji (well in back) is kind of like a law clerk. He is adept at writing seals to hold the spirits at bay while Muhyo does the heavy lifting, but knows close to nothing about actual exorcism. The series looks at their attempts to bring justice in this spiritual world.

The underlying story belongs to a classmate known as Enchu. Owing to some personal tragedy in his life, he felt that Muhyo took his opportunities from him and now does Forbidden Magic Law, to show more that he would have been the better choice as well as make things hard on Muhyo.

Overall, this is an interesting series, especially with all the terrible monsters Muhyo summons to carry out his punishments. A lot of work went into the character design so the creatures are both compelling and repelling. The tales are involving, even with Roji being a degree of a crybaby whiner sissy-face. But. But…but…but…

I was watching “The Layton Mysteries” at the same time and I was struck in the similarities between the two shows: a very innovative and daring lead, a bit of a lame-duck side kick and problems that need to be solved. On a nuts-and-bolts level, these shows are cousins. Maybe not identical cousins, but pretty damn close.

A key difference is that Muhyo does not suffer fools gladly. Yes, if you make a mistake, things can go pretty south pretty fast, but instead of being a tutor or a mentor, he is more of a tormentor. Things are never good enough or done fast enough or done well enough or done complete enough or…I assume if it wasn’t for the fact that Muhyo is the best and the education you get from him will never be second-best, most people would go looking for someone else to clerk for.

Yeah, go binge this one. It helps with the flow of the tales and the backstories are kept fresh in one’s mind as our duo is put through their paces to the inevitable second season.