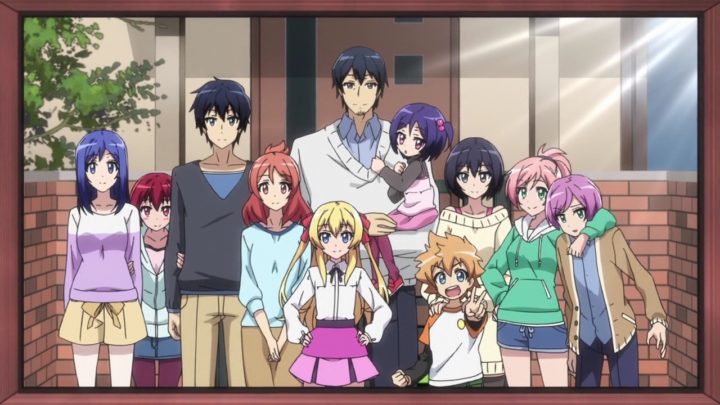 This is a real change of pace royalty show. Most of the time, those of noble lineage and descent are overweening, preening prats who feel that the commoners aren’t much better than the animals that they tend and can be (and are) easily dismissed or fed to the royal animals.  However, “Castle Town Dandelion” (“Jōkamachi no Danderaion”, “Dandelion of Jolamachi”) approaches this differently and has the regal family living as commoners…..more or less.

The story revolves around the Sakurada family, a family of nine super-powered siblings whose father is the king. The actions of the siblings are constantly being recorded and broadcast on TV, allowing the citizens to choose which one to elect as the next king. Yup, everything they do, and that is EVERYTHING they do, is open to public scrutiny. There are monitors all over the city, initially placed to offer protection to the Royal Family, but now, the citizenry can watch what goes on with all of them, as things are run not much differently than a mayoral election or even “Big Brother”.

Let’s roll call the capacious cast. From left to right:

Aoi, eldest child, eldest daughter. Special power: Invisible Power, which allows her to do anything once she has learned it. But she has a special hidden power of which we do not speak of.

Akane, fourth child, third daughter. The show is seen through her viewpoint. Special power: Gravity Core, which can manipulate gravity for her and others and allows her to speed up.

Sōichirō, dad and king. Special power allows him to read people’s emotions through their aura.

Kanade, third child, second daughter. Special power: Heaven’s Gate. This is an involved power, as she can create anything from items in the area, but there is a physical financial cost for it.

Misaki, sixth, child, fourth daughter. Twin of Haruka. Special power: All for One. She can clone herself seven times, but then these people have the personality of the seven deadly sins and have their own names as well.

Haruka, fifth child, second son. Special power: Lots of Next. This is a probability factor, to determine who will win. Not might, will.

What gives with the title? In the first episode, Akane makes the comment that she would rather be a dandelion in a field than a princess and the center of all this attention. It’s that there are a series of competitions, so the citizenry can see them in action by helping people or showing off their strengths. The shows are broken into two- and three-tale arcs, as we learn of their true feelings about how they just can’t wait to be king (or queen) or that they don’t. There is a real lack of sobriety in all of this.

Let’s be honest: you want someone with maturity and diligence to be the ruler. I have a hard time believing that someone who is 10 can lead this nation. And what if you are unhappy with your choice? Can they get voted out? This is a very frothy series, so even when it veers into ‘serious’ matters, it’s never really all that bad or horrible, especially when a crises occurs on Election Day that threatens the kingdom. You never feel that anyone is in honest danger. And because this is a comedy or sorts, they are not going to deal with real issues. What’s the crime rate like? Is there a homeless problem? Can you trust the banks not to make predatory loans? No, all we get is some kind of Battle of the Network Stars competition to help settle the monarchy question.

There’s nothing wrong with the series and if you like things light and easy, they you will have a good time with this show. Everyone understands what it means to be a person, royalty, someone with a special gift, a citizen of this town. It is also rare that I feel it has honestly concluded, as we select our selection, but we do leave the door open to see what that person’s reign is like. If you want something with a bit more bite, this show is not that, but if you want it goofy and silly, this works for you quite well.

And remember, it’s first run until you’ve seen it. Don’t stare at me.