“Dead” To the World

November 1st, 2018 in Anime, General Reviews, Movies by The Droid 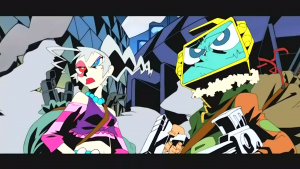 One of the functions of anime is to push boundaries. It can’t always be giant fighting robots, or a high school rom-com with witches or espers or someone who thinks they are God or a look at an alternative history with hip-hop samurais. Yes, there is a danger in this approach, as you can frighten off the more timid souls who are afraid to leave their comfort zone and you end up being cult.

The only reason I found this older offering (2004; a lifetime in anime) is that I ran across an article about “15 Must-Watch Forgotten Anime” movies (well, I own four of them, so it wasn’t that big of a deal to me). It’s just this one, which was rated at Number 2, takes anime and animation and science fiction and violence and sex and bounces it on its noggin for 50 head-twisting minutes (well, actually 43; you have about seven minutes of credits). The short-hand to this film would be if FLCL took the brown acid, THIS is what you would get: “Dead Leaves” (“Deddo Rībusu”).

We open up with Pandy (left) and Retro (right), two unlikely folks, who awaken to find themselves naked on Earth with no recollection of their past, but with superior physical abilities. After embarking on a brief but devastating crime spree for food, clothing and transportation in downtown Tokyo (mowing down and blowing up anything remotely connect to law enforcement), they are captured by the authorities and sent to the infamous prison called Dead Leaves, on the half-destroyed Moon (why is the Moon half-destroyed? How did it happen? You aren’t told and it really doesn’t matter).

It is a humiliating time for ALL the inmates, what with how they are treated and abused, but these two manage to break their chains and bust out (in one of the most unerotic sex scenes you will ever see), yet run afoul of the ‘wardens’, 666 and 777, who are biologically enhanced mutants, and will do anything and everything to kill them all. Now, they are referred as “three-six” and “three-seven”, although it might have been better to call them “three-sixES” and “three-sevenS” to understand it better. (Ha, ha. I said ‘understand it better’. Good luck on THAT one).

In trying to break out, Pandy and Retro come to learn not only the truth of their past, but why they are there and what they are expected to do.

The art style is not for everyone, as it is this nuwave, angular, garish colors, over-the-top action and a ludicrous approach to events. People are machine-gunned with a billion bullets, or cleaved in half via a massive drill or smashed against the wall by a giant fist or blown up in an A-bomb level of destruction, but the violence is so disattached from anything, it’s more a means to an end, so you are not grossed out by it, either in how the inmates are dispatched amid lakes of blood or how senselessly violent it all is. But the action is non-stop.

You are pushed or dragged or whip-sawed about, with that MTV-style of rapid editing, scene-jumps, bizarre camera angles and pointless pointlessness that sling-shots you to the breathless conclusion. This is a ‘movie’ (I use the term generously; 43 minutes does not a feature-length movie make) that requires multiple viewings, so you get all the jokes and see all the action and try and understand the rather miniscule plot. Oh, there is a plot, but it feels more like an afterthought. Not that it matters. I sometimes lament about shows that have no plot and are merely going through the motions. This has one, but it doesn’t get in the way of chaos and mayhem and sensory overload.

Rating the fan service is tough, as both the art style and presentation makes it hard to go “Wow! Look at those naked boobs!” But it would only get in the way. We are not allowed to slow down the pacing for any reason. Talk about the pedal to the metal! And keep in mind that in ‘real’ time, this movie may cover one full day, two at the most. With people pulling out and firing the strangest-looking weaponry ever invented, you are never at a loss for any of the extended shoot-‘em-up sequences that are part and parcel of this anime. Between the time they break out of their cell and see the prison guards to the end of the film, it is shooting and stabbing and blowing up crap and destruction unseen in many animes, with nary a break for a cup of tea.

I rarely lose my lunch over animes. The last time I did this was when I finished the first season of “Attack on Titan” and I felt that was a stunning effort that people should know about. This is just as stunning, but for a far different reason. You want to go to sleep? You can sleep when you’re dead; in the meantime, catch this hyperactive mind plotz.