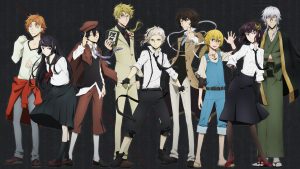 This was a show that was full of promise, but ended up devolving into the usual fight for supremacy genre that seem to bedevil this caliber of show. “Bungo Stray Dogs 2” (“Bungō Sutorei Doggusu” or ”Literary Stray Dogs”) started off the second season with an interesting take. The first season had us dealing with Atsushi Nakajima (dead center), who has the ability to change into a were tiger. He was taken on board by the Armed Detective Agency, a group dedicated to fighting the Port Mafia, a band of outlaws who also have an arsenal of people with special abilities.

I though the second season was going to see things from the Port Mafia’s point of view and how they dealt with the ADA. Alas and alackaday, things got knocked into a cocked hat when a third faction, The Guild, came into town. Now we have a problem: do we fight a two-front war against everyone, or do the Port Mafia and ADA put aside their differences to take on a more implacable foe and then take up the sword against each other for Season Three?

It’s that the novel idea (Ha, ha, ha. What a wretched pun) got really overworked. You see, everyone is named for a literary author (some are Japanese, so you don’t immediately recognize it as such) and their special ability is named for one of their works. The Guild deals with European and American authors, so that aspect of the tale comes into clear focus, and then it becomes stupid.

You start to notice that the villains are named like Herman M or Jane A or Fyodor D and their abilities are dubbed “Moby Dick” or “Sense and Sensibility” or “Crime and Punishment” and it completely undermines the original thrust of the show (Atsushi has a bounty on his head and the Port Mafia want to kidnap him and sell him off. And no, it’s not $$60 billion).

The fight sequences get rather tiresome, as the powers and abilities are pretty well matched, so it ends up being a bit of a draw, as no one can land a telling blow. Also, since these people have these special abilities, they are overweening prats or conceited ego-maniacs or just plain irritating with the needling and their version of “needer, needer, needer!” The only reason I wanted the Guild’s main plan to work is that it would have really cleared the decks, as it were, and then, the show would be over.

Let’s just say that a third season was guaranteed, no matter what the outcome was going to be for Season Two. And the original story that I thought would be there, the Port Mafia point of view and their plans for domination, was jettisoned for the interminable fight sequences.

I sometimes got the feeling that there was no real plan in dealing with any of this, short of “If you see ‘em, you fight ‘em!”, so a lot of the story was handled by Margaret M and her special ability, “Gone With the Wind”.

And remember, it’s first run until you’ve seen it. I will fight you and win!