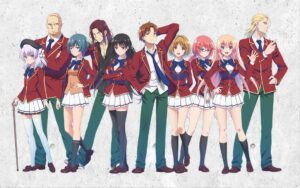 This is part of a one-two punch review in regards to Japanese schools and their educational system. Most animes use the schools as a jumping-off point to look at some harem rom-com or superhero education, so the school is more background or a platform for these events, rather than part and parcel of the whole approach. These particular shows I am scrutinizing look at the school itself and the academic mindset that drives them along. It seems harsh and cruel by our standards. Hell, it’s harsh and cruel by the Marquis de Sade’s standards! It makes one wonder if all private academies are like this. If they were any tougher, you might as well be training to be a Navy SEAL. Our first scholastic offering is “Classroom of the Elite” (“Yōkoso Jitsuryoku Shijō Shugi no Kyōshitsu e”, or “Welcome to the Classroom of the Supreme Ability Doctrine”).

We are at the Tokyo Metropolitan Advanced Nurturing High School, dedicated to instruct and foster the generation of people that will support the country in the future. The students there have the freedom to wear any hairstyle and bring any personal effects they desire and feel secure in the knowledge that the school selected THEM, not the opposite, so they saw the potential and possibilities, and they recognized the skills. Here, the sky’s the limit; only you hold yourself back. However, there are evil machinations afoot and if you don’t read that Student Handbook thoroughly, you are in for a heap of hurt.

We follow the exploits of D-Class student Kiyotaka Ayanokouji (stuck in the middle with you). He doesn’t make friends well or easily and would rather keep to himself. He has enormous potential, but not the desire to pursue things as fervently as others, thus his designation in the bottom tier. He makes a caliber of co-conspirator with Suzune Horikita (to his right) almost a female version of himself. Together, but separately, they navigate the landmines that bedevil this school.

Here’s the rub: you are given an allowance of 100,000 yen a month, to spend as you please, as you will be restored the following month…..maybe. See, I told you to read the handbook! Your academic performance lets you know how you did. You did notice I said D-Class student. You see, all the slackers and losers and hard-to-teach folks are dumped into this class and they learn pretty damn fast that they are the good example of a bad example. They are bullied and picked on and set up to fail by all those above them, even those C-Class dinks, as these nimrods don’t apply themselves and the teacher cares not one way or the other. She gets her paycheck regardless and poor class performance does not work against her.

It is up to our tandem to figure out how to use the system against itself to be able to survive, not only with their own classmates (where a lot of them blew their allotment that first month) but with the forces that want to send them packing. This is never more presented then when they go to a private island the school owns for a session of One-Week Survivor, where all the points are on the board and potential suspensions and expulsions is also on the menu.

I want you to know that I kind of tumbled to the darkness behind this school, just by how cavalier the D-Class students were. You see, if you improve enough, you can actually unseat another level and be THAT C-Class or whatever. It’s just that the ‘elites’ are what you would expect them to be: arrogant, exclusionist, loud-mouthed preening prats. And everyone in this school has some serious character flaw that is a true millstone around their neck. Plus, the system is rigged against you. The rich get rich and the poor get children, so to speak.

But within the darkness is the keen mind of Ayanokouji, determined to beat the system just so it will leave him alone. But he is hiding something as well and since the first season achieved nothing, a second season, at least, is needed to complicate matters. It’s just that this is a rather intense show and I would not see it at the same time with something equally intense or of the same caliber of show. And each show opens with a salient quote by some philosopher, to help drive home the point as to the strangeness behind it all.

Again, it is a school drama and you need to see all the hideous machination at work, so you get that butt in that chair (maybe a bag of chips and a cold brew) and run the string out. You really get to feel the viciousness, the cruelty, the devious nature of everyone and revel in the carnage left in their wake. And be happy that your school wasn’t like this.