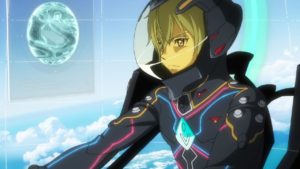 More on Part Two of the movie “Suisei no Gargantia ~ Meguru Kōro, Haruka”. Now, as I previously pondered as to why they did not decide to make this a two-hour (or so) movie, I do not know. Personally, I felt it would have benefitted from such a move, but then you lose the cliff-hanger ending for Film A, which would drive you into seeing Film B to conclude the offering and make for a more complete understanding of what is going on, although, for the most part, you don’t know what is really going on.

It comes off as not much more than a travelogue, as we see the life of people on these giant city-fleets and how they deal with other people on their giant city-fleets, who come along with items for trade or barter, so you can purchase or swap for that which you don’t have or have never seen. Oh, the story. The real story. An item that was pulled up from the sea bed in the last film appears to be a massive memory storage unit and could potentially explain a great deal as to what is going on and could even have technology. A lost technology that could benefit us, but it could also destroy us!

The main purpose of the movie (aside from a fan service restbit in the film) details the on-going relationship between Ledo and Amy. But we have the dark clouds looming and that comes in the form of Reema. Initially, she was rescued from her horrible city-fleet and then became best friends with everyone, even joining the messenger service that Amy works for. But she is a spy and, as seen in the conclusion of the last film, owns a Caliber, just like Chamber. Eventually, a form of coup is attempted, as Reema decides that….ooops, better stop there. Don’t wish to give away too much.

Whereas the previous film did a lot to set up the concluding film, the second film seems padded, as we have treaty negotiations and Pinion is chasing down a mysterious woman who can barely contain her two big secrets (and those things are huge) and fun and cavorting and eating, eating, eating. It really feels that they could have done a full movie, made it a bit shorter in overall length to fix up the slack passages and other slow points and created a far better result that this flaccid result.

Things just take far too long to manifest and, when they finally do, the end results are disappointing. Ledo is the key to all of this, but his ‘ignorance’ is necessary to make it work. It is a shame. Overall, the series is very good and the smaller OVAs (what have been called Episodes # 14 & #15) detail some critical back story, but, at the end of the day, it comes off as hurried and not very satisfactory. I can only recommend the films as they are part and parcel of the larger effort, and you may want to ‘complete the set’, but it came across as another missed opportunity to do something more than achieve something less.

And remember, it’s first run until you’ve seen it. I hope our dealings are peaceful.