April 2nd, 2020 in Anime, General Reviews by The Droid 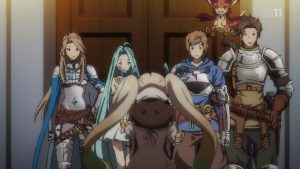 There is a problem when you try and convert a video game into an anime or a manga, in that the adaptations don’t always work. Yes, in a sense you have the best story board around, but you are spending a lot of your time fighting in the game and that the plotting may come off as a bit thin. Such are my concerns with “Granblue Fantasy: The Animation” in that it feels like a video game…and I wonder why.

We start off with Gran (guy in blue, right of center). He wants to be a skyfarer, but is kind of trapped on the floating rock city he calls home. His only companion is Vyrn, that floating lizard who claims he isn’t a lizard. They run into Lyria (that blue-haired maiden). She has a special power and that is to control Primal Beasts, really nasty monsters with sharp teeth that can breathe fire and perform other unpleasantries. They rescue her from the evil clutches of The Empire, who want to do terrible experiments with her and exploit her abilities.

A soldier of the Empire, Lt. Katalina Dressing….I mean Katalina Alize (far left) rescues her from her imprisonment, but this makes her an outlaw as well. They try to figure out how to get off this bloody rock and enlist the aid of Rackham (far right), a man who has been laboring on the reconstruction of a sky ship for many years. They are like a sailing ship, but have a bladder like a zeppelin and these weird beater rods that give the craft loft. Anyway, after a narrow escape from Empire Forces, they wend their way to the spot where we can fully use Lyria’s power.

The problem with the villains, especially from the Empire, is that they are more for showing their buffoonery than any real evil or malice. They are hoist on their own petards so frequently, it’s a wonder their voices aren’t higher. They are not as much evil but more an annoyance, much like bubble gum on the soles of your shoes. You can eventually get rid of it, but it is a waste of time in the process.

You can see the video game aspect of it: there are these small skirmishes as you collect your crew and ‘level up’ to earn more points or better weapons or whatever you need to defeat the enemy. And, on the way to your fate, you meet and help a variety of folks who have needs of your special skills. You also forge the bonds of camaraderie, so that when the Final Boss Battle occurs, you can operate as a cohesive fighting squad and put the bad guys to flight. (Insert triumphal music here, swelling to a grand musical climax.)

It’s a good-looking show and the sweeping vista you encounter on your sojourns leaves one in breathless awe. Even the battles, pitched as they are, keep you involved, even though you are pretty well assured of the outcome. It’s just that I knew we would not conclude everything at the end of the first season and there may be two more seasons after it, to fully tell the story. I wasn’t expecting anything intrinsically different than if this was “Twilight Princess” (although I hear that is coming out as a comic book). It’s all laid out before us. At its core, it is not any different than “Yona of the Dawn”, but her adventures were more daring and dangerous. This is not much more than a travelogue. Not bad, but could have been better.

With the binging aspect of it, since it feels like a video game, as it was a video game, you can treat it like a video game and just watch along as whomsoever is ‘playing’ it has taken command as to what is going on and you are just along for the ride. This is not necessarily a bad thing, especially if you enjoy how well things are unfolding and hope that they can achieve their goals and not lose another life and it might help things play out better.

And remember, it’s first run until you’ve seen it. Take to the skies!