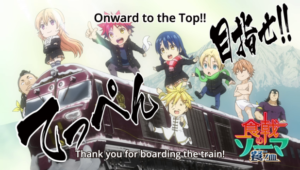 This portion of the series “Food Wars” for the third year generated a lot of controversy, as there was no agreement as to what it was. In the same field as “Is the dress blue or gold?”, “Did they say ‘Yanni’ or ‘Laurel’?” and “Is ‘Die Hard’ a Christmas movie?”, a lot of people felt the Totsuki Arc was actually a fourth season, while others felt it was an extension of the third season.

Sadly, both camps has enough evidence to support their claim, but since I feel that it went in a massive different direction, I find myself in the Fourth Season camp, and so am treating it that way. That means the arc starts on Episode 13 (giving us a 12-episode run for this arc).

So, there was a huge challenge for our chefs and some of them have fallen by the wayside. We are taking this train to the end of the line, a special Totsuki school in the vast indifferent snowfields of some part of Hokkaido that is off limits to mere mortals as ourselves. On this train ride, which seems to take like a week or so, the team is cooking constantly, honing their skills to do battle against the forces of evil and cruelty. It seems all they do is cook and cook and cook. So, when we get to the venue, the (cooking) gloves are off and we do battle.

It’s just that things are falling into a rut. It gets rather tiresome to decide who is going to be the winner and who is going to be the loser. It gets tiresome with the foodgasms, as it appears to happen far too many times, either in the episode or in the overall series, so the humor that is derived from it is getting stale, like it has been under the heat lamps just a tad too long. It gets tiresome that the preening prats are SUCH preening prats. And is all that food good?

Another problem I encountered is that a lot of these foods are well beyond my ability to even think I can have them. I have no idea, for example, where I might have a bear steak (not that I would; it is rather gamy and you can get trichinosis from it), or how you could make it something that is both marvelous, but allows one to understand how bear meat genuinely tastes. I will admit there were a few twists and turns that I did not see, but it basically got down to the passionate fervor of the rebels and the overweening arrogance of the establishment pawns.

Still, since each season builds off the previous, you have to watch this, so you can continue the string of the story, as it builds to the Final Countdown, as to what will happen to the heart and soul (and taste buds) of Totsuki.

And you binge. Because of the dynamic structure of the show, it can take on huge amounts of binging and it does tell the story better, as we move from one cliffhanger to the next.

And remember, it’s first run until you’ve seen it. I didn’t do what?