January 13th, 2022 in Anime, General Reviews by The Droid 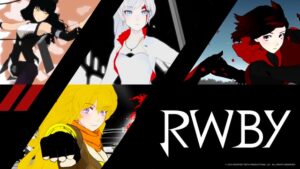 Life can be a complicated mess, as there is just so much going on that you are not prepared for when the worst happens, which is what goes down in season 4 of “RWBY”.

Pyrrha is dead and Salem reveals herself to be the power behind Cinder. Ruby has lost the support of her team and joins Team JNPR, now called Team RNJR. They go on a quest, but end up having to battle a ton of Grimm along the way. Weiss has been forced home and is not much more than a trained monkey, shilling for the family at their whim and is expected to be a ‘good girl’. Blake goes home to Menagerie, but trouble follows her and she is confronted with elements of her past that bedevil her present and threaten any future.

I do not want to say more, but be aware that more happens. It’s just that we have four or five threads flapping about in the breeze, but, trust me, they all come together and set up the excitement for the fifth season.

Let’s be honest: if you have gotten this far in the series, you are going to continue onwards, regardless. I have found it a very compelling series overall, despite some tropes and stereotypical aspects of things. And short of some major stupid plot twist (Ruby is pregnant and Yu-Gi-Oh is the father), you are going to stick it out like I have. Also, I have come to a degree of peace with the artwork. It still acts kind of wonky for my tastes, but there is still a compelling story to tell and still needs to be told, as the spider web of intrigue continues to extend its reach.

If you are reading this review and you haven’t seen anything, then stop, take an evening out of your schedule and gobble down the first season (like I did) to put yourself on track. If you HAVE seen everything up to this point, binge away. Please do not let the abbreviated aspect of this review deter you. I am not keen on giving you too much of a reveal or spoiler, but prefer you let you watch it unspool for you, rather than going “Yeah, the squealer gets it right between the eyes!”

And remember, it’s first run until you’ve seen it. What do we do?