October 27th, 2022 in Anime, General Reviews by The Droid 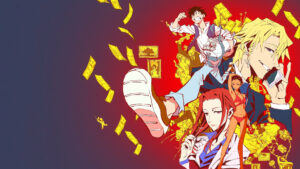 What is it about con men and great heist epics that enthrall us? Is it the intricacies of the plot in order to make this succeed? Is it the panic of potential discovery? It is that the person who is the mark is far and well deserving of them being taken to the cleaners? Is it a battle of one set of amoralistic forces against another set of amoralistic forces? Well, it’s all of that and a bag of chips. Now, if you or I get taken, it’s a travesty. But to those high rollers, that’s a different story. And that different story is “Great Pretender” (not to be confused with the Platters hit, which is called “THE Great Pretender”).

We follow the life of Makoto Edamura (that big foot). He is a small-time con artist. He originally joined a company to pay for his mother’s medical bills, but later discovered that they engaged in fraud. He was arrested and convicted. Once out, he tried to go straight, but no one wanted him, so, there you go.

He falls under the watchful eye of Laurent Thierry (blondie to the right), who finds Edamura an interesting personality and hires him on. Now, Thierry only goes after the mega-rich, ultra-corrupt, not just because that’s where the money is (and, to be honest that IS where the money is), but to bring them to some kind of heel. With the other members of the team, Abigail Jones (red bikini) and Cynthia Moore (red hair), they travel the world, going after the depraved, bored, rich people who make things miserable for others.

I enjoyed this show, as not only do we look at these millionaires who deserved to be greased and fleeced, we also see, at least in Edamura, a caliber of conflict. Yes, he does his con well. Yes, he’d rather be doing something else. Yes, no one else wants him, because of his past. Yes, Thierry is certainly not to be trusted. But both the draw of the money and the allure of the challenge are too hard to resist. We also learn the back stories of everyone, so at least we understand why they do what they do, as opposed to just HAVING them there, doing their nefarious schemes.

The art work is angular, but I cannot tell if that was an intentional decision, to play into the notion that, as a con man, you have to play all angles to succeed, or if they are just following suit from the manga. Certainly since we are using Abigail as eye candy, I felt you might want her a bit more curvy, but, again, these are tough, flinty people, forged in the furnace of despair and distrust, so you can take it or leave it. The action portions are involving, especially with the air race sequences (the Singapore arc), as you need that adrenaline burst to take care of the tension-filled sequences (like, what happens when your feminine charms fall flat? What’s Plan B?)

As to binging, I would break it up into the specific arcs. Yes, you could plow right through it, but I find it is better to take each caper as an independent unit. Savor the come-uppance, go have a lunch and return for the next session. That breaks down as 5-5-4-8 (although I would break the last arc in half).

And remember, it’s first run until you’ve seen it. Who are you, really?