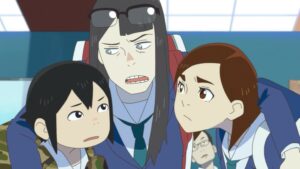 There are a lot of animes out there about making animes and all the trials and tribulations that are required to pull it off. It also acts as a primer as to what is needed to make all this stuff work, but I have rarely encountered one that really looks at the entirety of the process, not just the artistic aspect of it, but the financial considerations as well. This project is pulled off quite well with the marquee-busting title “Keep Your Hands Off Eizouken!” (“Eizōken ni wa Te o Dasu na!”).

We are at Shibahama High School, in a town with a rather unusual quality. This place seems to be more of an island or peninsula town and is laid out in a jumbled hodge-podge of buildings and walkways and docks and a river runs through it. Then, we get introduced to Midori Asakusa (far left). She is full of curiosity and imagination, yet not very sociable, as she pours all of her being and fiber into her artwork. Her policy is that “anime is all about the setting,” and she has kept various designs, inspired by her daily life, in her sketchbooks. She has a plan. Oh, she has a plan to make anime. But, but, but….she lacks the capital to finance it and the professional tools to manifest her dreams or even a place to do this.

One of Midori’s classmate is Tsubame Mizusaki (far right), who is a charismatic amateur model and famous in the school. She is expected to be an actress in the future as both of her parents are actors, but she actually wants to be an animator. She is especially good at capturing character movement. One day, Asakusa helps her to escape from the Men in Black (her security) and hide in a nearby laundromat, where Tsubame’s characters merge with Asakusa’s background to make a cohesive whole.

They are joined by Sayaka Kanamori (middle), who, although sees things as profit and loss, has the caliber of conniving mind needed to be able to finance this shindig. Together, the three of them set out to make anime.

This is a marvelous-looking show, especially when the fantasy aspects kick in, and they all ‘enter’ the realms of possibilities with anime. This, of course, runs smack-dab into the reality of trying to pull this off, especially with a Student Council dead set against it, Kanamori’s questionable tactics in getting the money and equipment for this project and how Tsubame tries to convince her parent’s THIS is the direction she wants her life to go in.

You also experience all the hard work they pour into their efforts. I mean, you don’t just see them putting in long hours at the table top; you really feel what they are going through, having to meet numerous deadlines and trying to put forth the best product they can with limited budget and always skating on the edge of disaster. Art isn’t easy.

It is always difficult to express how the artistic mind works, but this show does it, showcasing not only what they think and see but how they maneuver with that vision. Yes, we have the standard ‘beat that deadline’ sub-plot, but it feels more organic and not paste-on as they can sometimes be, as well as the inevitable head-butting that comes along with any artistic endeavor. Time and tide wait for no man.

As to the question of binging, although it can withstand such a trial, I vote against it on a personal level. The artistic approach and the financial machinations are too enjoyable to merely rush through it, so I suggest maybe two episodes at a sitting. Art can’t be rushed; neither should this show.

And remember, it’s first run until you’ve seen it. How’s the story coming along?