September 3rd, 2020 in Anime, General Reviews by The Droid 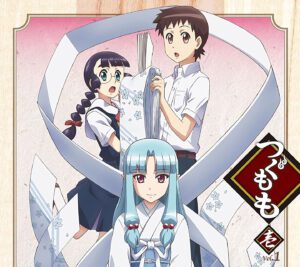 Japan has a rich tradition of ghosts and hauntings and possession. It is almost part and parcel of their culture, right up to the present days. It’s that I am seeing a lot of shows recently regarding yokai and demonic possessions and haunted (or cursed? I’m not certain) objects that intrude on a ‘normal’ society that acknowledges that they existed, but don’t exist in this current age of sobriety and science. Thus, this convoluted introduction to “Tsugumomo”, where the past meets the modern.

We open with the youthful lad, Kazuya Kagami, who apparently lives alone. At least I didn’t really see a parent apparent. He leads a rather unhappy life and sometimes sleeps in class. One day, he awakes to find he is being a Class-S pervert to Chisato Chikaishi (glasses and that fan; she uses it to devastating effects. Uh….the fan, she uses the FAN to devastating effects!) After fleeing to the roof, he takes comfort in his late mother’s obi, which he carries with him. He is then attacked by a disembodied wig, but the obi saves him. It reveals herself to be a girl and they are forced to destroy the wig, which is an amasogi.

The spirit of the obi is a tsugumomo and used to serve Kazuya’s mother for many years. In order to combat the amasogis that have infiltrated the area, Kazuya and Kiriha (the obi’s name) will have to work together. The series follows their adventures together in trying to dispel all the amasogis that have come here and to train Kazuya into being a better user of the obi.

Well, this is really a harem comedy, despite a lot of tense and terse moments. Part of the problem is that Kiriha has no patience to take the time to educate and teach Kazuya the best way to use her when combating these evil forces. This means he has to wing it and he usually ends up on his sit-upon a lot. Then, there is a tense battle with Kukuri, who is the goddess of the area, wears a Noh mask all the time and is very powerful. However, after a huge fight with Kazuya and Kiriha, she loses a ton of power, reverts to a chibi form and is now a mere child. This means she has lost a ton of effectiveness and stature. Adding to this, her shrine is destroyed (and it was in bad shape to begin with) and has to move about, trying to find some new HQ.

The rest of the show is not only K&K doing battle with a bewildering variety of amasogi, but also having to deal with a lot of snide and disparaging comments about Kazuya’s ability to be a malison cleanser.

I’ve seen worse series. This is not to say it is terrible, but I saw the same caliber of ‘relationship’ in “Kamisama Kiss” and “The Morose Mononokean”. What is it that these people of talent and ability just are almost maliciously reluctant to take on an apprentice or new master? It gets to a point that it is not humorous, as the mentor takes a sadistic glee in watching his initiate fumble and flail and falter and fail. I can understand some degree of resistance, but you eventually have to reach the point where this is the new reality and you have to forge ahead.

The conclusion intimates a second season, as the concerns raised have not been totally addressed. And this show needs to be binged, even if the fight sequences get a bit repetitious, as we have to see Kazuya’s progress as he not only learns how to operate Kiriha, but how to create a caliber of trust and support, so they can do their very best all the time, and it appears they need to do that all of the time.

And remember, it’s first run until you’ve seen it. Don’t you know how to use me?