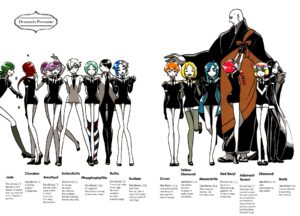 This is the oddest looking show I have seen in some time. And I don’t mean wild and crazy as with “Dead Leaves”; I mean it more like ‘Why are they all built so oddly?’ Look at how long their legs are and the hips come off more like a U-joint of some construct. And that the show is CG just adds to the visually unsettling nature of things. Thus, we come to “Houseki no Kuni” (“Country of Jewels” or “Land of the Lustrous”) and the tales of all of these gems.

Yes, they are all jewel people, but as with gem stones, they have varying hardness. You do remember the Mohs scale from science class? Talc is the weakest at 1, diamond is the hardest at 10, right? Do you remember science class in high school? Do you remember high school? Do you remember anything? (It’s been a tough year). The one we have our eyes on is Phosphophyllite (the one with the striped legs). The hardness is 3.5, which means Phos is easily broken and/or shattered. Rutile is the doctor (right next to Phos) and can repair them, provided there is a goodly amount, if not all, of the broken material.

They do battle against an implacable foe, the Lunarians, who value them for their worth and try to capture or enslave them. Aiding them in the battle against the Lunarians (and they remind me of some Hindu frieze) is the monk, Master Kongo, who spends a ton of time in meditation and lets the gems try and defend this land of theirs. The heart of the story purports to show the emotional growth of Phos and how to understand their place in the Grand Scheme of Things. But it doesn’t start off too well.

Phos is a bit of a klutz and spends a lot of time in the doctor’s shop, getting fixed. Being a 3.5 isn’t the greatest thing, as this means a lot of what can be done by Phos is shooed away, as the resilience is not there. I hope you have noticed something during this review. I haven’t used gender pronouns. Seriously, although they look like ladies, they are gender neutral. I know up there, in their bios, it uses male terms, but, in all honestly, they never use ‘she’ or ‘her’ in the show. It’s always their full name or a shortened version of it. For me, I thought they were ladies, owing to their lithe structure, bizarre outfits, sensible footwear and I am one of those types that views gems as feminine.

Phos really, really tries to do his/her best, but it is a day late and a dollar short. Always. Adding to this is that some of the other gems do not like Phos. Well, Cinnabar doesn’t like anyone, but that’s more personality-based. It’s just that when someone important to Phos get destroyed and captured, plus the addition of agate legs and a gold-and-platinum alloy for the arms, Phos becomes a real force to be reckoned with.

Although I did like the overall point of the show, that everyone has a worth and you just have to find what it is, the animation is very unsettling, as it is that herky-jerky approach. Nothing runs smooth and silky and I also got the feeling that Master Kongo is deeply annoyed at all the gems, as he has to come in and clean up the mess.

For a bunch of people who have known each other for tons of time (I am talking in the hundreds of years), they don’t honestly like each other. This means working together is a work-out and causes at least half of their problems in dealing with the Lunarians.

If you want to treat this as a curiosity piece, go ahead, but I really can’t give it high marks. If it doesn’t know where it wants to go or what it wants to accomplish, don’t be asking me for directions.

I am not fully certain if binging would help this show. It is a strange fish to begin with and you might tire of Phos being constantly broken and falling short all the time. I would offer a cautionary OK, just because I found it a lot to try and take in all at once.

And remember, it’s first run until you’ve seen it. Not again!